I feel there’s a strong argument to be made that Tarantino is a better writer than a director. The films in which he has been involved, where someone else has taken the helm, seem overall to be superior to those where he directed his own scripts. That might be Robert Rodriguez (From Dusk Till Dawn), Tony Scott (True Romance) or even Oliver Stone (Natural Born Killers): what they all bring is an ability to rein in QT’s awful tendency to wallow in self-indulgent excess, particularly when it comes to dialogue. They can say, “No, Quentin: these characters are not going to engage in a 10-minute discussion on comic-books,” when Tarantino the director would tell Tarantino the writer, “Great idea! Why not make it 15?” 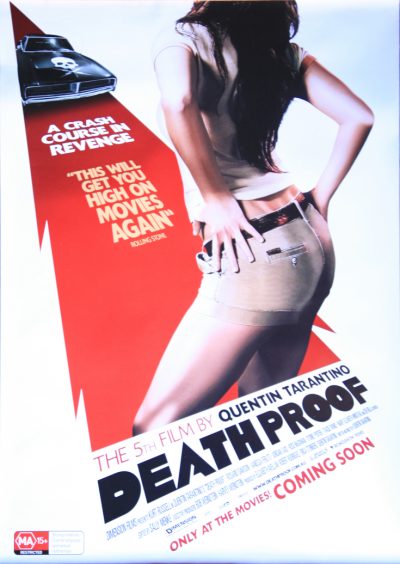 Which brings us to Death Proof.

The first half had me contemplating gnawing a limb off to escape; it was like being stuck in the worst bachelorette party ever, populated entirely by vagina-toting versions of Quentin Tarantino. Vapid, smug non-entities, flapping their lips at each other as they smoke weed and get drunk, without saying anything of the slightest interest. And this was the regular version, god alone knows what the 127-minute “director’s cut” would be like. In a rare moment of self-awareness, five years later, Tarantino said, “Death Proof has got to be the worst movie I ever make.” And he’s dead right, up to where Stuntman Mike (Russell) finally revs up his titular car and barrels into the gals at top speed, as they blare yet another faux-nostalgic song on the soundtrack. [It is, I believe, Tarantino’s own goddamn jukebox in the film: it doesn’t get much more self-indulgent than that.]

The subsequent silence came as a blessed relief, broken only by my muttering, “For fuck’s sake, Quentin: it’s Dave Dee, Dozy, Beaky, Mick & Tich. Not Mitch.” If you’re going to be a pretentious cunt, professing love for a forgotten sixties boy band, at least be an accurate one. I suspect he was going for much the same shocking impact with this crash, as the death of Janet Leigh in Psycho. Except, Marion Crane’s stabbing didn’t exactly provoke the same unsympathetic feelings as the fatalities here – best summarized with a rousing chorus of “Ding-dong, the witch is dead.” Admittedly I was left wondering, where could the film possibly go?

Then Zoë Bell shows up.

Give Tarantino credit, he wrote the role for her, and let Bell simply be herself. This was probably wise, since she had no real “acting” experience to that point, and having her try to play any kind of character could have backfired. Instead, he just lets Zoë be Zoë, and she delivers a far more credible character than any of the actresses: you believe she actually would know about Vanishing Point, something Rosario Dawson as Abernathy Ross fails to sell. Her dialogue is not the unmistakeable QT honking which poisoned the first half so badly. It sounds like a real person – and, specifically, Zoë Bell [If you need proof, watch the excellent documentary, Double Dare, featuring her and veteran stuntwoman, Jeannie Epper].

This alone wouldn’t be anything like enough to rescue the film. The final reel, however… While the situation to get us there is contrived as all get-out, much like Cherry Darling’s lethal limb in its partner, Planet Terror, the pay-off is so much fun, you can’t help let it slide. And slide Zoë does, all over the bonnet of a 1970 Dodge Challenger, hurtling along rural roads, and pursued with lethal intent by Stuntman Mike. I am still far from sure how they pulled it off. And you know what, I’d rather preserve that mystique, because knowing couldn’t make it any better. “There’s no double, there’s no CGI, it’s all practical,” said Bell. She’s too modest to add, it’s all utterly awesome as well.