“In the future, glacial melting has covered 98% of earth’s landmass.” Not the best of starts to your film’s synopsis, when it contains a large scientific whopper. Truth is, if every bit of glacier and ice-cap turned to water, sea-level would rise by less then 300 feet. Not that this wouldn’t case issues, naturally – just that, here’s what North America would look like if that happened. Sucks to be in Florida, to be sure. Arizona? Not so much. It’s odd, because other stuff here is relatively on point. One of the big plot elements is the use of a HAARP cannon to stimulate the atmosphere and, in here, trigger a volcanic eruption. This is actually a thing. There’s a government facility in Alaska that does this, which has been linked by some to areas such as weather modification and earthquakes. Surprised to see it showing up in a SyFy original movie. Maybe it’s the government’s way of getting nobody to take the idea seriously… 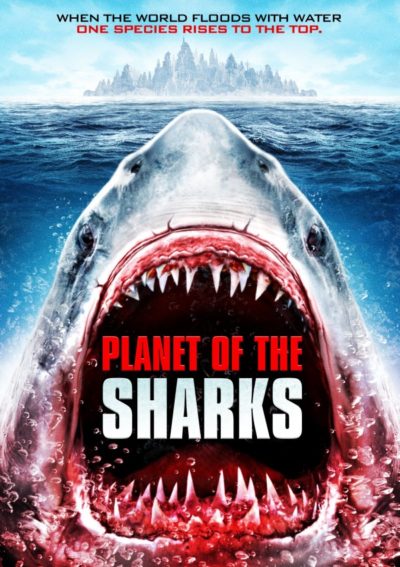 Anyway, in this fictitious future, global warming has sunk humanity, save a few hardy survivors, eking out a precarious existence in floating communities. There’s an effort to reverse the trend, under Dr. Shaw (Sullivan), using a rocket to send a “CO2 scrubber” into the upper atmosphere and a narrow window for launch is approaching. Unfortunately, the local sharks are being mind-controlled by a gigantic mama shark, who appears to have a grudge against humanity, and the hordes are gnawing their way through everything in their path, up to and potentially including the rocket launch-site. Perhaps they can be lured to a dormant underwater volcanic caldera, which can be triggered using their HAARP gun, to wipe the fish out? Just throwing that out there.

Mostly Waterworld with sharks, there are elements of Mad Max: Beyond Thunderdome and Day of the Dead in the early going. This is a post-apocalyptic world, which scientists are trying desperately to fix – but other survivors might be the biggest threat, rather than the external problem. There’s also a kid survivor, who does nothing of note, and a Tina Turner wanna-be in charge of a tribe of bandits. She speaks with a distractingly strange accent that seems to be aiming for N’orleans, yet should have made a left turn at Albuquerque.

Still, if they’d kept going down those routes, this might have been more interesting. Just as zombies were tangential to what made Zombieland work, so this could have been a shark movie about more than sharks. Unfortunately, any such lofty ambitions are abandoned at about the one-third point, and we’re left with a largely predictable procession of people and sharks towards the launch-site. Though I did like the way they used the giant shark to power the facility, after firing the HAARP cannon knocked out all their electronics, due to the resulting electromagnetic pulse. Or maybe I dreamed that. Not sure. It is comforting to realize that, after the coming apocalypse, while fresh water and dry land may be hard to come by, there will be no apparent shortage of parasailing equipment.

Best death: Actually, it’s a non-death. Parasailing in a shark movie seems perilously close to wearing a red shirt in Star Trek. Yet, miraculously, the participant here actually survives with their limbs intact. That was unexpected.