I realized when watching this, that I didn’t actually know where the Ozark Mountains are. Turns out they’re on the border between Missouri and (I should probably have guessed) Arkansas. Given this was filmed in Louisiana, I’m not sure the makers known much about the Ozarks either – except that they rhyme with “shark”.  Painfully generic, and populated largely by painfully stupid characters, this has a nuclear family – mom, dad, introverted teen daughter, preppy-ish son and grandma – take a trip to a lakeside cabin. Inevitably, and for no particular reason, the river is infested with sharks that chew up grandma, and go on to threaten everyone else in the area dumb enough to set toe near the water. Which, it appears, is about 99% of the population. 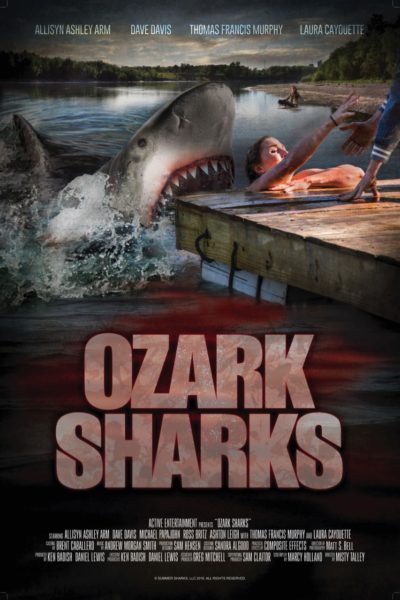 Yes, the idiocy is strong in this one. For example, none of the adults even try to notify the authorities – that’s left to one of the teenagers, and they are inevitably written off as a prank caller. There’s another point where someone is “stranded” on a log, and demanding rescue, when the bank is about 10 feet behind them and easily accessible. And I lost count of the number of times people stood right on the edge of the lake to have a conversation, when any sensible person in their situation, would be moving rapidly toward higher, more shark-resistant ground. Oh, I know a certain lack of intelligence is par for the horror genre. If it weren’t for people entering basements, reading books and staying in locations they really shouldn’t, movies would be a lot shorter and considerably duller. This, however, takes it to and beyond dumb, to an eye-rolling degree.

There are a couple of bright spots. The best character is likely Jones (Murphy), the local bait-shop owner who possesses the biggest weapons stash since the original Tremors. His truck comes equipped with the kind of weaponry necessary to the plot, triggering the following exchange with one of the city folk, who it appears is not a devotee of the second amendment:
“Why do you need a harpoon cannon?”
“To shoot my harpoon with.”
Murphy appears largely to be channeling Tommy Lee Jones – which may explain the name – yet is a lot of fun to watch. The rest of the cast appear to be going through the motions, with daughter Molly (Arm) the sole character to show anything like development. Although I have to say, the final death did come as a significant surprise, both in target and execution. It may be related to the image above, which had us quoting Fargo: “I guess that was your aquatic life-form in the wood chipper.”

They do also play nicely with the Deep Blue Sea trope, in which a character gives a rousing speech only to be interrupted by being eaten. In this case, the victim barely gets half a sentence in – just long enough for us to identify the cliche – before getting gobbled. That, and a “I need a hand” joke that appealed enormously to the 11-year-old in us, were the high moments of what was otherwise significantly more irritating than amusing. Lazy and uninventive, the imagination on view here appears to begin and end at the title.

Best death: giving this to one of the sharks, who has its mouth stuffed full of fireworks, turning it into an water-dwelling pyrotechnic display.