There is a sweet spot for this kind of film, located at the point between not taking yourself seriously enough and taking yourself too seriously. You are typically dealing with a concept containing no small amount of imaginative lunacy, requiring significant suspension of disbelief. If the film doesn’t make at least some effort to sell this, why should the audience be buying it? But on the other hand, you need to remain aware that people are generally watching for the amusement of their lizard brains. This is not the Discovery Channel, least of all back in the day when you could actually learn things not involving pawn shops and swamp people. 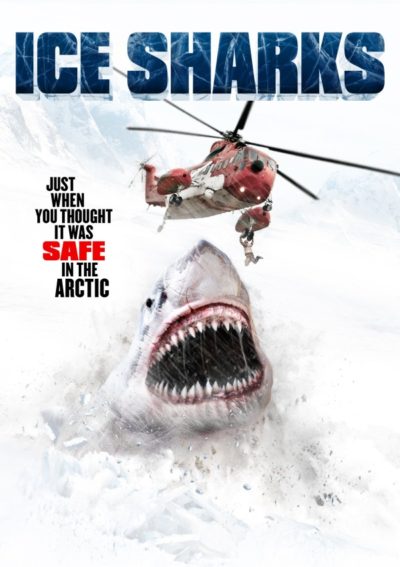 While produced by The Asylum, who are responsible for Sharknado and its sequels (as well as a slew of mockbusters, which run from the sublimely bad to the surprisingly competent), you’re going to be disappointed if you’re expecting a blizzard-oriented version of the same. Instead, this is a non-camp tale, which seems closer to Tremors with a side-order of DeepStar Six. An Arctic research base finds itself under assault from a previously unknown species of shark, apparently moving south due to global warming. Its main talent is sawing through ice with its dorsal fin, like a fishy icebreaker. Oh, and eating people. That goes without saying though.

The second half takes a bit of a detour, as the sharks’ relentless carving off of pack-ice, eventually leads the base to run out of support entirely, and sink to the bottom of the sea, 90 feet below. Remarkably, the building is both heavy enough to sink, yet watertight enough to remain habitable, at least in the short term. The survivors have to figure out to how to call for help and/or escape their frigid tomb, as well as the predators circling outside. It’s played dead straight, with little or no humor at all. If they’d abandoned the entire “ice-breaking sharks” thing, and found an alternate method of driving the plot, this could have been a generic Arctic action film, operating entirely outside the parameters of Sharknado Week.

That is not necessarily a good thing, however, especially when there are enough flaws to stop it from being genuinely credible. Apparently when you’re doing scuba and have a regulator in your mouth, you can still speak without the slightest impediment. As I said: not seriously enough. When you aren’t winking at, or along with, the audience, the standards by which you must expected to be measured, shift and become more stringent. Under this tougher assessment, flaws you might be prepared to overlook in a less serious production, become harder to ignore.

Best death: seen top, the scientist who gets his lower leg bitten off, and is left to bleed out on the ice.