This feels like two different movies, spliced together unconvincingly in a couple of scenes – maybe the co-directors each did their own half? One chunk concerns park ranger Kate (Blackmore) who witnesses her scuba partner being chewed up by bull sharks. These have come upstream and are building dams of branches and human corpses to stop their prey from escaping. Stop me if I’m wrong, but save for the corpse bit, isn’t that beavers? Anyway, she teams up with a local survivalist, Carl (Craighead) to try and clear the river of human prey. The other half sees a tech company on a team building exercise with their crappy boss. Their purpose is to be the human prey. Save the couple of vaguely-likeable ones, of course. 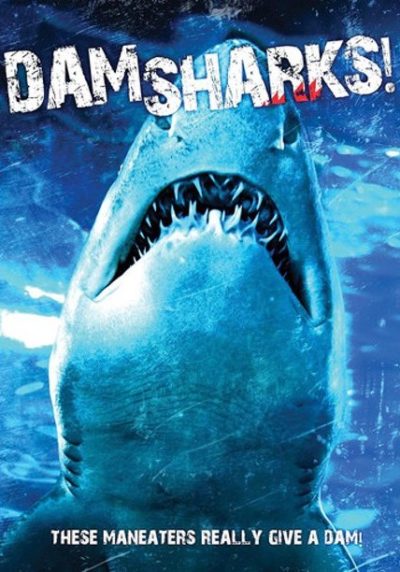 One of the genre tropes is sharks leaping up, to attack people who aren’t actually in the water, and this is full of it (top). Seriously, these sharks have a better hang time than Michael Jordan at his peak – except when necessary to the plot, if it’s vaguely-likeable characters in the boat. Then, the sharks forget they can fly, in favor of kinda circling aimlessly. The “ranger” side of the plot works rather better, since it’s more relevant and shark-related. The tech company side is a tedious exercise in office politics, when all we really want to see is sharkicide. The film does well there, with more CGI blood and severed body parts than expected, which helps make up for there being no-one you’ve ever heard of being in the film. [Actually, Jason London, who plays the big boss, has an okay resume. Most importantly, he was in last year’s Zombie Shark]

There are some shameless lifts from other (probably far better) movies. For instance, the concept of using scuba tanks to blow shit up is an obvious Jaws nod, acknowledged by more than one character as being something they saw in a film. In quick succession, we also get a PG version of Ripley’s line from Aliens, “You don’t see them fucking each other over for a goddamn percentage,” and another character proclaiming “Game over!” If only they could have afforded Bill Paxton. Still, there are a couple of surprises and sufficient fun to be found here: if you’re not predicting the casualties when three people are crossing a river on a tree-trunk, you’re not watching this the right way.

Best death: the ranger shoots someone being eaten by sharks, in the head.