The nuclear monster has a long tradition in American cinema (and elsewhere – most obviously, Gojira). 1954’s Them! remains a classic, and represents only the tip of the atomic iceberg. At first, I thought this was going to be a throw-back to that era, opening as it does with Cold War footage and J. Robert Oppenheimer solemnly intoning, “I am become death, the destroyer of worlds.” Even the font for the title in nostalgic for an earlier time. Instead, the film is almost defiantly hip: R/C drones play a prominent role, and we get references to Instagram, YouTube, Yelp, hashtags, emojis and foodie shows. This probably gives it a limited shelf-life (or half-life?), yet overall, it works surprisingly well for late 2016. 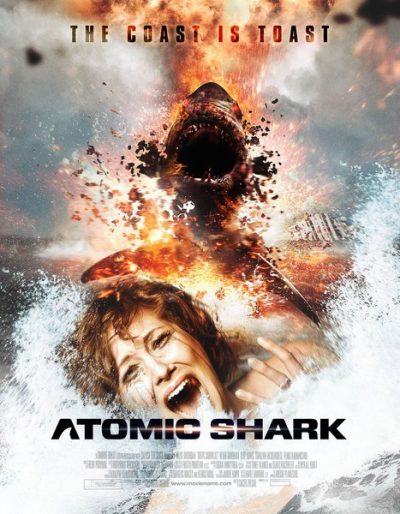 It’s set in San Diego, and the wreck of a Soviet submarine has leaked radiation into the water. This has caused a local shark to become hyper-aggressive, and radio-active to such an extent, its fin literally glows cherry-red, while boiling the water nearby (pre-fried fish washing up on the beach being one of the signs puzzling beach-goers). In fact, only the cooling effect of the water stops the shark from going critical and exploding in a mushroom cloud. With the government trying to suppress the rising body-count, it’s up to local life-guard, Gina (Smith), and her largely useless sidekick, Kaplan (Campo), to save the day, along with her sailor father (Fahey) and drone-flying sleazeball, Fletcher. The last is played bu Faustino, who used to be Bud Bundy in Married With Children, 20-30 years ago. I feel old.

The approach here is to take a ludicrous concept and have everyone involved play it totally serious. At no point does anyone point out the biological impossibility of the shark here existing: that’s taken as read, and everyone is simply dealing with it. Yet the film has some genuinely amusing moments too. At one point, it goes epically wide-screen for a heroic jet-ski assault. Another involves a musical cue and a dynamite fuse. We actually laughed out loud at both scenes – and I stress, this was with the movie, rather than at it. Certainly, some of the effects leave a bit to be desired – okay, a lot to be desired. Yet Smith makes for a fine, independent heroine, completely defying any Baywatch-esque expectations.