Since the first appeared in 2013, the annual Sharknado film on SyFy has become the Super Bowl of B-movies. It may or may not actually be any good, but no-one calling themselves a fan can afford to miss it. This year, it was Sharknado 4: The 4th Awakens, and the series continues to provoke disparate reactions. At time of writing, 22.5% of IMDb raters gave it a 10/10: the next most were the 14.4% who gave it a 1/10. My theory is, the Sharknado series is a litmus test. Those who watch “bad films” to mock them and feel superior, will hate these movies, because the films are quite deliberately intended to be how they are. It’s a great deal harder to mock something, when it successfully achieves its goals. Those who are happy to enjoy the nonsense for what it is, however, are likely fine with the concept, will take the entertainment value as offered and judge it on those terms.

It’s probably clear my view tends toward the latter, since I’ve been fond of The Asylum for a while. They deserve respect, for having found a niche and exploiting it, in a way B-movie producers have been doing since the roadshow films of the thirties. David Michael Latt is just one in a line of such mavericks as Roger Corman, Samuel Zarkoff, Lloyd Kaufman, etc. Criticizing the Sharknado series for being “stupid” is a nonsensical irrelevance. I don’t claim it’s immune to criticism: purely on the level of enjoyment, Sharknado 3: Oh Hell No was disappointing, and perhaps tried too damn hard. I mean, sharks in space? That’s a stretch, even given the limited amount of plausibility for the series overall. It’s just that you need to understand what it’s trying to achieve.

This is something of a return to form, although still short of the most entertaining entry, Sharknado 2: The Second One. Set five years after #3, the world is now safe from sharknados, thanks to the efforts of the Astro-X corporation, whose network has stabilized the atmosphere. Except, it turns out to be no good against sharknados made from sand, as we find out when Las Vegas gets it. Things then escalate through sharknados of boulders, oil and fire to the, likely inevitable, nuclearnado, which can only be stopped by the ever-heroic Fin (Ziering) diverting Niagara Falls into the air to act as coolant. Meanwhile, his wife April (Reid) is actually alive, and has been given cyborg powers by her father, played by Jake Busey. 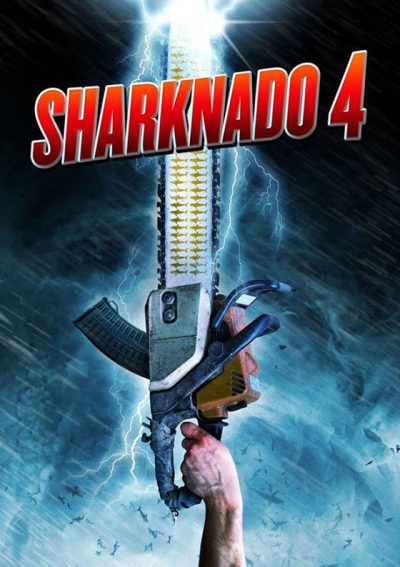 The last entry galloped up and down the East coast of America, and it’s only fair that this time, the mid-West and West are the main targets. You can pretty much cross off the states as they whizz by: Nevada, Arizona, Texas, California, Washington and Missouri all get their share of carnage. Naturally, this is less about plot than a relentless excuse for a succession of pop-culture references and C-list celebrity appearances, and these are the usual mixed bag. I know little and care less about any Real Housewives, who seem to infest this film, hanging off it like so many remoras. Reality TV and alleged “YouTube stars” are virtually a blank slate to me, so I probably missed most of these. There were certainly points where I felt I was supposed to be going “Ooh! That’s ___”.

The best were probably Gilbert Gottfried as a sharknado chaser (above), and a Baywatch reunion, teaming up Alexandra Paul and Gena Lee Nolin with Fin’s father, played by David Hasselhoff. And yes, there was slow-motion running.  Most of the film nods hit the mark, at least once they got past the obvious Star Wars mentions, starting with the opening prologue crawl. The rest ran from The Wizard of Oz through Network to The Texas Chainsaw Massacre, and I was fairly impressed how these meshed into the narrative. However, it was often the little moments I loved: the concept of Sharknado slot-machines rang true (we were there in April, and themed slots were rampant, from Game of Thrones to Gremlins), and I loved how during the attack, the Bellagio fountains were squirting sharks into the air.

I’m not sure I saw the need for throwing all the different -nados at the audience. As the Vegas opener shows, a well-crafted sharknado is more than sufficient to hold the audience’s attention, and the new dishes on the menu didn’t add particularly much. And even by Asylum standards, the CGI for the finale at Niagara was particularly woeful, especially when April was rescuing her son from a barrel which had been blown into the river. Or was this a subtle dig at The Hobbit? Despite apparently running through the entire spectrum of ‘nadoliciousness, it seems there’s still room for franchise expansion. Based on the way this ends (though I’m damned I can even remember who that “Nova” character mentioned is or was), I’m guessing #5 will be going international.

The optimist in me hopes this might be the opening of a new vista of creative possibilities. The pessimist thinks this is Latt making a cheap grab for the overseas market – a sharknado on the Great Wall of China, anyone? Of course, there’s no reason it has exclusively to be one or the other. However, the financial aspects of the production really don’t bother me, and the potential in worldwide sharkiness certainly cannot be denied. This latest entry proved more than adequately entertaining, especially compared to the fourth entries in some other series (hello, Crystal Skull). So, like sharks returning to their spawning grounds [note to Film Blitz intern: please fact-check this before publication [note to self: hire intern]], we’ll return to SyFy at around this point next year, and await the next installment.