I’m a great believer in cinema as a collaborative process. Perhaps more so than any other art-form, it’s the coming together of a group of people, who pool their talents, and create something which is greater than the sum of their individual abilities. On the other hand, there’s this. I knew I was in trouble from the opening credits, which told me Ms. Atomic did not just direct and star in this, she also produced, wrote and edited it. Oh, and wrote some of the songs on the soundtrack. This is spreading yourself thin, at the Marmite on toast level, and the results are about what you’d expect.

It’s a comedy. I laughed… let me see… once. In its defense, this does only run 55 minutes, not including the ten minutes of end credits. Though it’s worth sitting through those, for the 8-bit video for Night of the SharkSquatch which shows up at the end, and may be the best thing this has to offer. The rest is a girl-gang spoof, taking place in Seattle where the three-strong Plain Devils [so called, because they find the term “she-devils” sexist; pardon me, while I hold my splitting sides] are looking to recruit a fourth member. They find a candidate in newly-arrived immigrant Lil’ Gypsy (Karamanyan), who bonds with gang leader Bomber Hoshi (Atomic) over their shared love of Mickey Rourke. 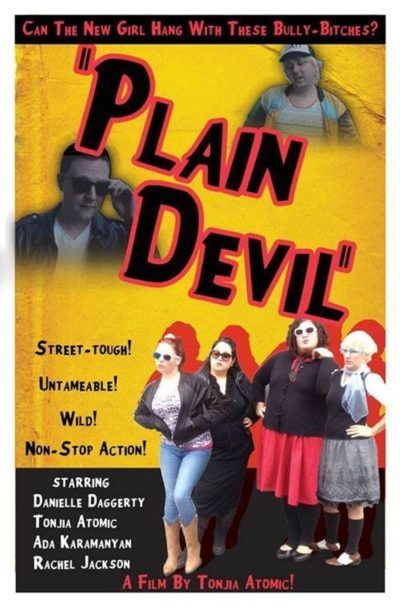 It’s that which leads to the sole moment of actual comedy. Gypsy says, “Oh Mickey, he’s so fine,” to which Hoshi replies, “So fine, he blows my mind.” I’m a sucker for an unexpected eighties song reference, as you should know. Otherwise, it’s wall-to-wall crickets, with every theoretical joke, belaboured well past the point where rigor mortis has set in. The Plain Devils are a bit crap. We get it. God, do we get it, with endless scenes of them failing to cause trouble, not get tattoos, etc. This is all accompanied by what I can only assume are Ms. Atomic’s pals who are in bands on the soundtrack, providing less an accompaniment to the movie, than a discordant racket over the top of it. If any of them were playing in a bar, I’d get up and leave. Then there’s Ms. Atomic’s lyrical talents, of which this is a sample:

Basic technical abilities, like getting all your characters in frame, are also something Atomic fails on occasion to accomplish.With one of the girls being called Einstein Vagein (Jackson), the film avoids an F grade mostly by good fortune. It was watched the same day as Dracula: A Vampire in Beijing, which effectively reset the scale of what “F” means. I’m still figuring out how in the hell to write about that. Relatively, this isn’t so terrible, yet feels like it was made by somebody who watched one too many John Waters movies, then decided she wanted to cosplay as a film-maker.