I remain a sucker for stop-motion animation. When done well – Ray Harryhausen or Henry Selick – it’s awesome. Even when not done well, there’s still an otherwordly quality to it, which often works better for some things e.g. monsters, than bad practical effects – and certainly better than bad CGI. Piper is probably master of the cheap end of stop-motion, having been doing this kind of thing for decades. I think Arachnia was my first encounter with him, and it was nice to see that he’s still marching to the beat of his own drum. I was a bit concerned to see him working with the Polonia Brothers, which feels like a step down for Piper. Turns out those fears were unwarranted. 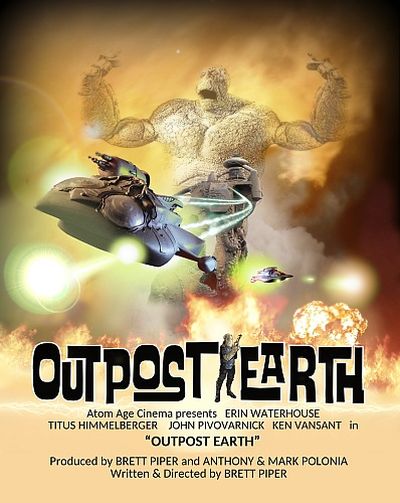 This begins with a surprisingly cinematic alien invasion of Earth, then jumps forward, to a point when the survivors are barely eking out an existence. In the countryside, there’s Kay (Waterhouse) and Penny (Gylling), who live with Prof. Eisenberg (Carver), while trying to keep out of the way of the new alien overlords, and the radiation-mutated creatures that also roam the landscape. A stranger comes into the group: Bruce (Himmelberger), a former thief, who is both saved by Kay – she’s a bit of a bad-ass with her crossbow – and then saves her in turn. An uneasy truce is eventually established, as Eisenberg tries to figure out some way that humanity can fight back, and reclaim their planet from the invaders. Turns out the answer lies in a combination of alien tech… and alcohol?

To be absolutely clear, you need to have a tolerance for this kind of thing. If you’re at all wanting anything polished and slick, this is potentially going to be the worst film you’ve ever seen. I knew what to expect from the Piper brand, and so was ready to cut it the necessary slack. I read another review which compared it to lo-fi music, and that’s a very good analogy. It’s the imperfections here, resulting from the production method, that give it character and separate it from your typical Hollywood product. For example, there’s a giant, golem-like creature (whose identity will come as far less of a surprise to the viewer than the movie characters), which feels almost like a Piper nod to King Kong, made on a budget of a couple of hundred bucks.

The human performances are functional, but do get the job done. While they’re mostly a selection of the usual post-apocalyptic archetypes, there’s decent chemistry between the participants, who act like family as and when appropriate. The concept that Bruce can fly an alien spacecraft when he’s drunk is totally audacious: it’s so silly, you can’t help embrace it. Hey, this is hardly much more illogical than what they foisted on us in Independence Day. Speaking of which, I was certainly more entertained by this than Independence Day: Resurgence, despite the budget here barely being enough to keep Liam Hemsworth in sandwiches for a week.