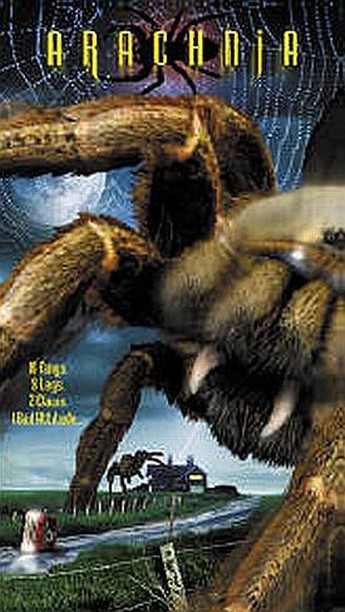 There’s something endearing about stop-motion animation, regardless of the actual quality of the product. Piper is no stranger to the field – he directed A Nymphoid Barbarian in Dinosaur Hell which, as well as being one of the best titles ever, was a throwback to One Million Years BC. Similarly, this harkens to the likes of Them!, Tarantula! and others that misused the exclamation mark – though the attempt to evoke the 1950’s is somewhat derailed by the entirely gratuitous nudity and lesbian canoodling. A plane carrying a party of six clich…er, characters is forced down in a remote area by a meteor. Inevitably, it releases a horde of giant spiders, who make a beeli…sorry, spiderline for the farmhouse where our heroes await rescue. Luckily, they have guns, a chainsaw and a box of dynamite. Let the squashing commence.

At first, this seems like sly satire – check out the discussion about meteors in the plane, featuring the “Doublemint Twins”, two bimbos of staggering intellectual proportions who’d rather bathe than find food. However, this angle gradually evaporates, and the characters become what they parody: the square-jawed hero, action girl, the lecherous professor who doesn’t believe the spiders exist, the goofy, immensely irritating guy who can’t die fast enough. My main complaint is, the film needs at least two more deaths – and that’s a shame, especially since there’s one that is extremely cool, in a cheap, cheesy, retro way. More stop-motion and less tedious, repetitive footage of things blowing up would have helped too. But, hey, that’s probably also true for Pearl Harbor…