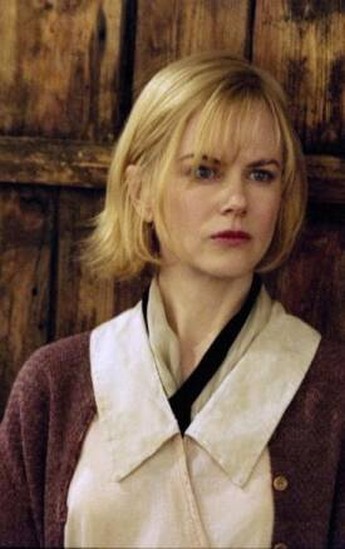 In depression-era America, fugitive Grace (Kidman) turns up in the remote town of Dogville. With some qualms, they take her in, but she discovers that their hospitality is not without a price. Two sentences: 177 minutes, one set. Just to make things interesting, the locations are largely reduced to chalk lines on the floor, and a narrator (Hurt) fills in the blanks. Welcome to the wacky world of Lars Von Trier, about whom more horror stories have probably been told than any other director, yet who has no problems assembling a stellar cast (Lauren Bacall, James Caan, Ben Gazzara). And for someone who’s never been to America, thanks to a fear of flying, he seems rather keen on setting films there.

You know you’ll be challenged by his work, but here, it comes off more as Von Trier trying to be clever, rather than genuinely thought-provoking. What is he saying: humanity sucks? If that’s all, why take so damn long to say it? After stoically taking the town’s torments for 170 minutes, Grace suddenly changes personality in an unconvincing fashion, though the finale is satisfactorily Shakespearean, with one particularly chilling line. But the rest of the film lacks this level of emotional intensity, and the narration often states what should be clear from the acting. This time, Von Trier has hog-tied himself with the self-imposed obstructions – while I respect what he’s trying to do, this would probably be more effective in the theatre than on screen.