This is a nicely twisted morality tale from Brazil, which begins with Arturo (Esteves) surfing the dark web, and engaging the services of Charles (Casella), a serial psychopath he finds there. Because Arturo wants someone – two people to be precise – killed. After negotiating the deal, with some special conditions attached, he returns home, and continues preparations for the 20th birthday of his daughter, Michele (Pepita). A cake is served. A shot rings out. Michele collapses. Seconds later, another shot. Arturo, too, is killed. Then Charles watches the video he was sent, containing the password that will release the balance of his fee, and in which Charles explains how things were not quite what they seemed. 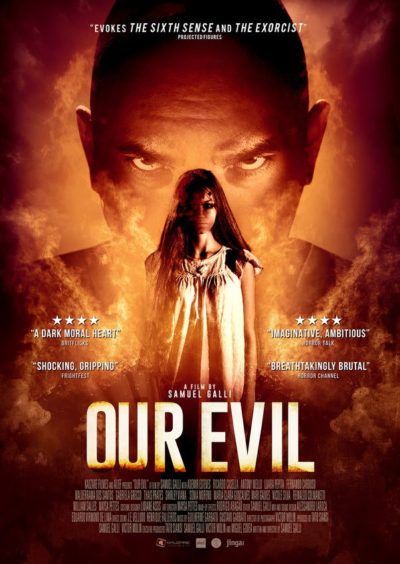 The bulk of the film thereafter is largely told in flashback, beginning with Arturo as a young man (Cardoso), when he was plagued with visions that drove him to the edge of suicide. He is literally about to slit his own throat, when one final vision rescues him. He meets a clown-like figure in a circus (this sequence feels a little Lynchian), who explains that Arturo needs to embrace his talent and turn what he sees into a force for good. Thus begins the journey which, more than a decade later, would eventually lead to Arturo hiring someone to kill both him and his adopted daughter. You may well figure out the details before the film reveals them, yet this is not the kind of film which relies on a twist for its impact.

Its pacing is interesting, playing like a series of jump scares – except they’re jump scares necessary to the plot. By which I mean, it feels like Galli likes to lull the viewer into a sense of tranquility, with extended scenes of almost mundane activity. Then, all of a sudden: bang, something will suddenly happen, both jerking you back into paying attention, and also moving the story forward to the next chapter. For instance, it cuts from Charles talking amiably to two women in a bar, to them tied up and being tortured in his house. I can’t deny it is effective, even if it sometimes feels as if the movie (spiritually, rather than acoustically) has two volumes: “mute” and “eleven.”

According to the IMDb, it doesn’t appear Galli has any other credits at all to his name. If that is indeed the case, this is a remarkably assured piece of work for a first-time film-maker, with a strong script and solid performances from both Esteves and Casella. The effects (by Rodrigo Aragão of Mar Negro fame) are relatively sparing, yet deliver what’s needed when necessary, usually around those exclamation points in the plot mentioned above. By the time we reach the end, with Charles awaiting the arrival of a fast-food delivery, you already know it’s not going to be just a pizza that turns up. Yet your foreknowledge doesn’t make it any less satisfactory, when it arrives with a large side-dish of karma.