Tomorrow, we start off our fish-tival of Shark Week 2022. While that will be focusing on movies from the last couple of years, I thought I’d chum the waters with this infamous mockbuster out of Italy. Even though the makers waited several years after the release of Jaws, Universal was still eventually able to get an injunction preventing its distribution in the US, and remains vigilant. Director Castellari also did The Inglorious Bastards, and allegedly, when Quentin Tarantino want to screen a double-bill of that and this, to promote his Inglourious Basterds, Universal declined to give permission. Perhaps because, truth be told, it’s better than a couple of the official Jaws movies… 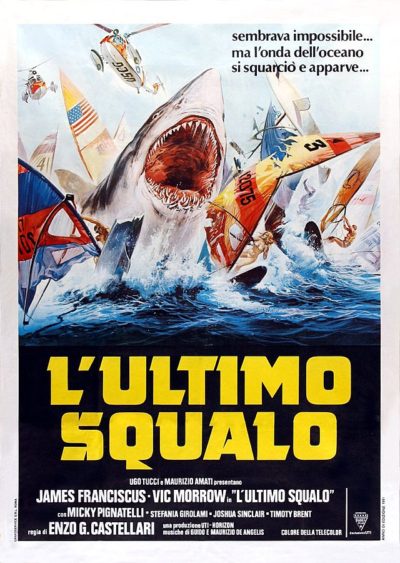 There’s no denying it is a knock-off, though pulls together elements from not just Jaws, but the first sequel as well. We begin with a wind-surfer vanishing, but local mayor William Wells (Sinclair) won’t let that interfere with his impending festival as he heads towards election day. Local writer Peter Benton (Franciscus) and shark hunter Ron Hamer (Morrow) feel otherwise, and are proven right after the great white breaks through the protective nets to cause carnage at the event. A group of kids, including the mayor’s daughter seek vengeance on the creature, and this goes about as well as you’d expect. So does the mayor’s attempt to catch it from a helicopter (I’ll take “Poorly considered plans” for $800, please, Alex), leaving Benton and Hamer the last hope of defeating it.

No shortage of mockable elements here. The fake Ferrari shark – sadly, Georgia, not Enzo – which makes Bruce from Jaws look like the real thing. Apparently, it fell apart during shooting, so they could only use the head. Morrow’s energetic accent, drifts inexorably on the current, beginning in Ireland, before finishing somewhere in the North Sea. Combined with his hat and facial hair, leaves his performance feeling like you ordered Quint on Wish. [Given events not long after, I also kept wanting to yell a warning to his character about staying away from the helicopter…] The miraculous way the characters could chat underwater while using SCUBA equipment, causing Chris to mutter repeatedly, “They. Can’t. Talk!” A shark that will ram its head into rocks or clog up an outboard propeller with its flesh, to get to Human McNuggets. Oh, and it roars…

Yet, for all its bonkers stupidity, it remains adequately fun, and occasionally self-aware, e.g. a TV cameraman cynically suggesting “Use a little stock footage. Nobody will know the difference.” Considering the amount of stock footage this does use, it’s an audacious line, though the scene of a large great white tearing into a fleshy chunk is genuinely disturbing. For a finale, the shark breaks off a piece of the dock, and swims away with a group unluckily marooned on it, then slowly picks them off. It is surprisingly entertaining, albeit still complete nonsense. If I had seen this on the heels of Jaws, I would likely have been annoyed. Yet neither I nor Michael Caine could claim with a straight face that it’s as bad as Jaws: The Revenge.