It’s certainly a provocative title, and the synopsis is no less going for the jugular in a scripted movie: “The director of the largest media company wants to expose how left-wing powers use film to control populations.” Ok, bring it on. I am open to being convinced, having lately sat through my share of shitty moral lectures thinly disguised as entertainment (hello, Black Christmas), produced by an industry which is among the most morally bankrupt in existence – one which let Harvey Weinstein run rampant in it for decades. But Christ on a conspiratorial bicycle, is this dull. Pro-tip: you can’t expect to wake people up, if you are sending them to sleep. 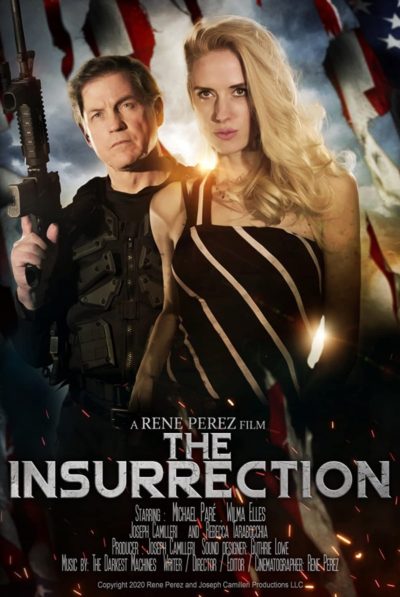 The central figure is Joan Schaffer (Elles), who has long been an insider, but has finally opted to blow the whistle on the hidden agenda mentioned in the synopsis, in a series of interviews. Knowing her exposure will immediately bring down the wrath of those in power, she hires a Sergeant Major (Paré), to act as her bodyguard while Joan completes her mission of disclosure. His job is to protect her against the initial “accidents” e.g. a drug overdose, and then the much less subtle attempts on Joan’s life which will inevitably follow her going public. What in effect this means, is 90 minutes of switching between talking-head interviews of Schaffer, with parties friendly or adversarial, and Paré standing in a junkyard, blazing away with automatic weapons. Neither are up to par.

To give you an idea of where this comes from. Less than two minutes in, when the Sergeant Majors tells Schaffer’s PA (Tarabocchia), “You’d better start making sense,” her instant reply is, “My employer is part of what you lower-classes call Illuminati or whatever you people call them.” Clearly, this is some new definition of “making sense,” of which I was previously unaware. The SM just shrugs and accepts it at face value: if you’re not prepared to do so, just turn the film off, because it’s not going to get better. For this to succeed, it needs someone with charisma and public-speaking ability. Hell, David Icke would have worked. Instead, Elles’s heavily-accented and flat delivery is not going to convince anyone.

There are still elements here with which it’s hard to argue, such as the veiled references to Jeffrey Epstein – whom I should add, did not kill himself. But if you are genuinely interested in such topics, ninety minutes of Googling will prove more informative, and likely also more entertaining. It doesn’t help that the forces of the Illuminati, as depicted here, are a bit crap, being relatively easily defeated, by one bloke who appears largely disinterested in proceedings. If that’s the hidden power behind the curtain, we’ve got nothing to worry about. Indeed, there’s a case to be made that this is nothing more than a cunning bit of PsyOps from the Illuminati, whose ineptness is deliberate, intended to to discredit the theories it supposedly espouses. There, that’s something to think about…