This rare Swiss horror movie plods along without much to distinguish it for the first hour, before finally kicking into life down the stretch, and making up for lost time. It centres on a group of young friends, who plan a weekend camping up in the Jura mountains, hoping to “enhance” proceedings by finding and consuming the psychedelic mushrooms native to the area. It’s not long before they get a flat tyre and encounter a creepy local farmer; however, they decide to press on regardless. The ‘shrooms kick in, just in time for one of them to meet the farmer’s daughter, who is quickly revealed as the true psychopath of the family. Her victim staggers back to camp and falls unconscious as a storm breaks. The rest of the group try and make their way out of the woods, but end up taking shelter in a deserted farmhouse. Guess who’s property it is? Ding-ding-ding! [Probably in cowbell] 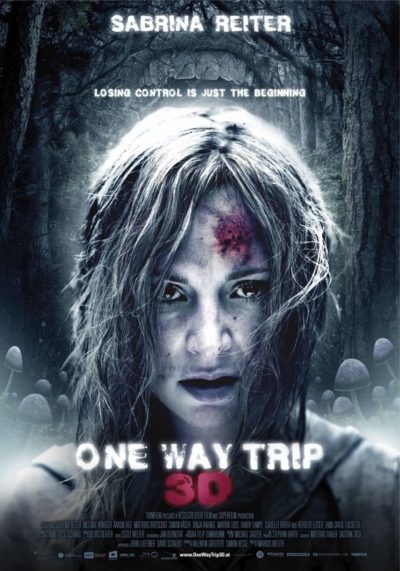 Originally filmed in 3D, you would be hard pushed to detect much specifically Swiss about the bulk of this. Outside of some shots of Zurich, and rather nice mountains, it could be just about anywhere, especially once you get into the “woods and their lunatic residents” side of things. The characters are similarly generic, ranging from your enthusiastic druggie, to Valerie (Reiter), the sensible girl who has to be talked into trying any of the natural drug. Guess who becomes the final girl? Before we get anywhere near that point, we have to deal with romantic tensions within the group, as Valerie’s somewhat ex-boyfriend has also come along on the trip. Will they get back together or not? I think I speak for just about every viewer, when I say: who cares? It’s likely significant it takes almost an hour before the group discover one of their number has met a grisly fate, and it’s not an interesting hour at that.

Then, it’s as if whoever was responsible up to that point, handed the reins over to a more enthusiastic director. The body count starts to tick up a great deal quicker, and in some moderately interesting ways. The knife through the back of the head (top) would have looked particularly gnarly in 3D, I suspect. There’s also a good plummet from a roof, and the fake jump scares are mixed with the real ones to decent effect. The photography is also significantly improved, culminating in a beautiful aerial shot, as the last survivor is lifted to safety. The film then drops a final twist which I must say, I did not see coming, at which I found myself nodding in approval. You do have to wonder where all this energy, invention and technical skill was for the first two-thirds of proceedings. Better for it to have turned up late, than not at all, and it helps salvage a entry which would otherwise have been as tasty as a severely expired Toblerone.