There has been a bit of controversy over this movie, in that Korean mega-hit Squid Game, has some definite similarities. Its creator, Hwang Dong-hyuk, says he wrote his script back in 2009, so we’ll never know for sure. But damn, the opening scenes of lethal yet childish contests are strikingly familiar. A group of people, forced to play a lethal game of ‘Red Light/Green Light’, then the survivors become fodder for a giant cat? Really: what are the odds? In Hwang’s defense though, the similarities feel more on the superficial level. His creation is considerably more grounded, and wants to make points about Korean social constructs. Miike’s approach is loose, fantastical, and is concerned about personal philosophy, if anything at all. Which succeeds better is a matter of opinion, though I never felt Squid Game was quite all it was cracked up to be. 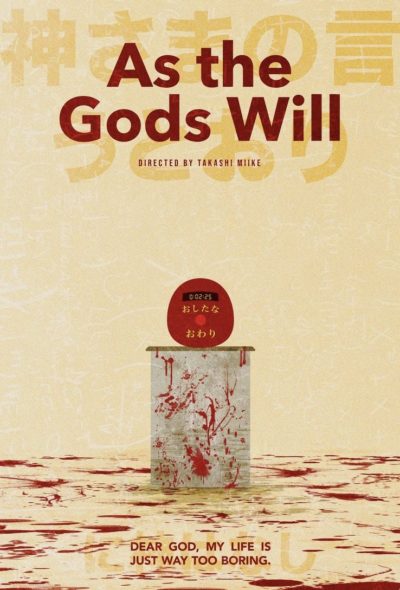 The participants here are are high-school students, whose tedious history class suddenly becomes a terminal contest. The sole survivor is Shun Takahata (Fukushi), who moves on to the next stage, with “winners” from other classes. Those who make it through that, end up in an alien spaceship, shaped like a cube, hovering over the Tokyo Tower. Further savage competition ensues, whittling the numbers down, until it becomes Shun against the psychotic – and there’s always a loony in these things – Takeru Amaya (Kamiki), with the fate of the group at stake. Who is behind these wicked games, and what is their agenda?

To be blunt, do not expect meaningful answers to any of the above questions. Miike is clearly a lot less interested in the destination than the journey. This finishes in almost a cliffhanger, which makes it feel like there’s another act needed. Providing you’re fine with that, there’s a lot of sick imagination on view, as you’d expect from Miike. This begins with a bang – or multiple bangs, as heads explode into a shower of red marbles. You then get a giant cat chasing people dressed as mice until they can figure out how to pin a bell on it. It’s the twisted ingenuity in these, where the film wins out over Squid Game, with Shun having to be every bit as inventive to get through the gauntlet.

I was also okay with the lack of explicit social commentary, which sometimes seemed a bit heavy-handed in Squid. On the down side, we don’t get much backstory on the characters, and this limits the impact of their deaths. The apparently international nature of events (similar things are reported to be happening around the globe) is never explored either: it might have been fun to pit Shun against “champions” from other countries. It would be a stretch to say the film will stick in your memory, at least on more than a superficial level. Yet, purely on that superficial level, you won’t see many films where one of the threats is a monstrous, talking polar bear on a snowboard.