Disgruntled textile student Irina (Vilo) is fed up with life: dumped by her boyfriend, broke and hating her classes. When a mysterious envelope is dropped through the door, offering her a summer position in a remote rural village, she decides she has nothing to lose. However, it feels as if there’s something off-kilter with the place and its inhabitants, virtually as soon as she arrives in the hamlet. It’s a ten kilometre hike into the woods to start with, and then there’s their odd greeting of “Hello and farewell beforehand.” Still, it’s a chance for Irina to get away from the pressures of modern life, and learn about traditional methods of production. What could possibly go wrong? 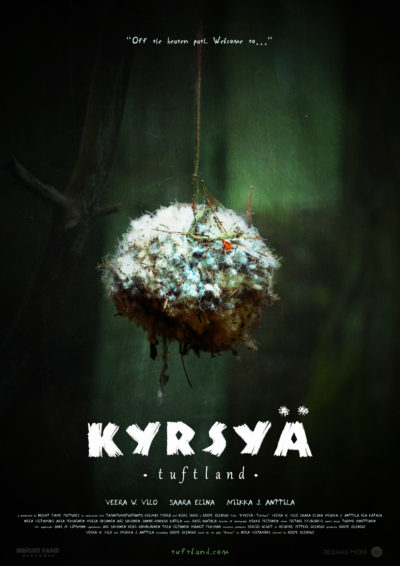 Well, if you’ve seen just about any folk horror over the past fifty years, going back to the original The Wicker Man, you’ll have a pretty good idea of exactly what could possibly go wrong. Though I can only presume Irina’s knowledge of cinematic trends is limited, since she appears completely oblivious to danger signs which would have any genre fan heading for the quickest forest trail out of there. It’s clear the residents do not hold with modern ways, particularly in the area of gender activity. The men go out and “hunt” – quotes used advisedly, since I’m not sure squirrels, hedgehogs and moles are exactly big game. The women stay home, and weave pompoms, as on the poster. It’s these which eventually prove to be Irina’s breaking point.

It’s all rather… Finnish, I guess, by which I mean low-key and sardonic, rather than in your face, as it probably would be in a Hollywood version. The slightly flaky subtitles perhaps work for it here, giving the villagers a peculiarly foreign quality; there are times when you have to read the subs twice to work out the meaning. An adaptation of a stage play, Kyrsyä, incidentally, is the name of the place where everything unfolds. I never did work out what “tuftland” means. Feels like it should be a Finnish version of Ikea, devoted to selling carpets.

The performances are good enough. Vilo could easily play Irina as a bit of a bitch, yet never comes off that way. The villagers are, without exception, appropriately weird – there’s just different levels of creepiness. Pertti (Anttila) is almost civilized – he’s the one who meets Irina off the bus. On the other hand, there are the town’s resident versions of Beavis and Butthead, whom we first meet staring at her, as she swims in the lake. While it all looks very nice, I reached the end and was wanting more of an exclamation point on proceedings. It’s here you can detect its theatrical origins most, and what might have worked on the boards, feels underwhelming on screen. I was left thinking Kyrsyä still could be a pleasant enough destination for a holiday. Suspect that wasn’t quite the message the director intended.