Dear god, this was a chore, right from the moment I realized this was largely going to consist of crappy “found footage”. Not one, but two people are wielding cameras, on one of those weekend getaways to remote country cabins, which only seem to take place in horror movies. The particularly irritating one is Leo (Haapiainen), whose sole talent seems to be an ability to provoke and annoy people. This isn’t limited to other characters in the movie: he’ll soon be getting under the skin of most viewers, too. However, he is at least memorable, which I guess makes him an improvement over everybody else, who are poorly-defined, existing simply to bicker before falling prey to… whatever it is that happens. 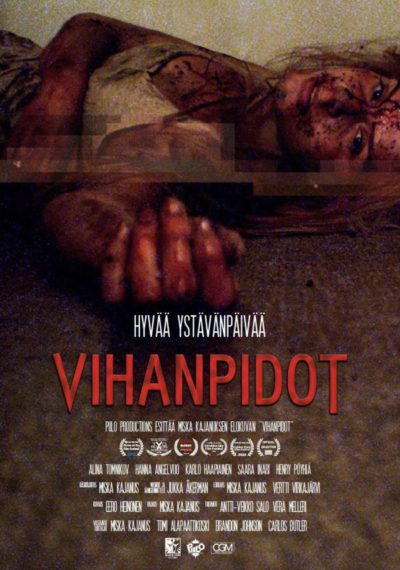 That’s not me avoiding spoilers. It’s more that the storyline here is largely incoherent. Something to do with one of the people having murdered their twin years before, and their spirit  now (why?) has decided to come back and take revenge on anyone to hand, by driving them mad. This all unfolds through the footage recorded by Leo and Tomi (Pöyhiä) over the course of the trip. The wrap-around has this evidence being screened by a policeman (played by the director) for his ex-girlfriend in a car by the same lake, which has to be in breach of just avoid every imaginable investigative procedure. Needless to say, it doesn’t go well, though this section, being traditionally shot, is at least watchable.

Indeed, if the film had perhaps concentrated solely on this aspect, it might have succeeded as there is some nice cinematography to be found. However, any goodwill that it generates, is rapidly pissed away by the addition of a lengthy coda, which could not be more cliched if it tried. It appears present solely in order for the film to reach the 75-minute mark. You’d think, given this brief running time, that the makers would feel impelled to hit the ground running and get their story under way, quickly and efficiently. Instead, it’s over 35 minutes before anything even semi-horrific happens, close to half-way through. Unless you count the sub-soap opera drama and stuff which makes up most of the film to that point. I did find suffering through it reasonably horrific.

Even when the more traditional horror elements kick in, the found footage approach means it’s barely watchable, and there is little no internal logic to be found. Just because you are playing fast and loose with cinematic conventions, does not mean you get to make shit up as you go along, which seems to be the general approach here.