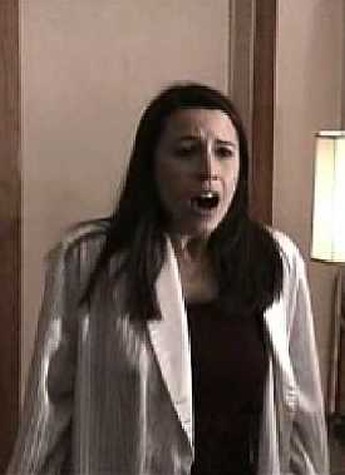 Hang on, didn’t we see this film a couple of weeks ago? Only, it was called Carnage and was directed by Andy Milligan? Well, kinda. As there, we have a happily-married couple who move into their new house, only to find that its murderous past comes back to haunt them. There’s not much hidden here, as the introduction reveals the house was owned by Walter Bowden, who killed a dozen people, including his son, before hanging himself. It’s not long before Linda (Stone) is hearing things, though can’t convince her husband (Kulas) that there’s anything up: then a stranger (Crone) knocks on the door, and explains the house’s history. Will the restless spirit of Bowden wreak revenge or can he be stopped?

The script is not awful, and Stone actually good in the role; she might have a future beyond the community theater level which would represent the peak for most of the cast here – Kulas is particularly weak. It’s McConnell’s direction that sucks the life out of the scenario, generating virtually no tension whatsoever. He relies far too much on false scares, and as a result when the real thing comes along, the effect is severely diminished. The threat posed by the spectre is also too vague for much of the running time, only becoming more than indistinct, poltergeisty nonsense in the final reel. Mark D’Errico’s score seems to have strayed in from a better movie, and the final scene manages a certain poignancy that is probably the most effective thing in the entire feature.