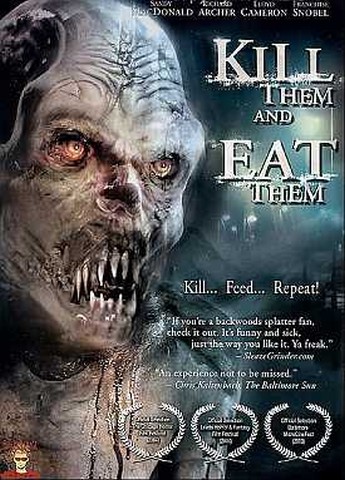 Admittedly, this film really didn’t have much of a chance to begin with. The previous night, we’d been at a city planning meeting until 2 am, so had about four hours sleep before going to work that day. We barely coped, opted for an early night and chose this feature – based, it must be admitted, largely on its short (80-minute) running time. We were less than ten minutes in when Chris, defeated by the muffled, badly-recorded dialogue and despite the amusing scene where someone throws a rock and knocks a monster’s hand off, began breathing heavily. I think she got the better end of the deal: I soldiered bravely on, more or less conscious until the end. It may only have been eighty minutes – it felt more like a full eight hours. There’s a mad scientist. He is unleashing hideous mutations. A bloke and his girl go to investigate.

To describe this as dreadful would be…about right, actually. Said scientist may be the only one who has any acting experience, with the rest of the cast apparently a bunch of the director’s mates. The monsters are nothing at all like the picture on the right, though in the film’s defense, that comes from the single-disk release, so expectations here were…basically non-existent. Imagine something made of latex, papier-mache and model paint, wielded by an enthusiastic, but somewhat backward six-year old. Well, these are worse than that. The only element of note is some bizarre animation occasionally intercut throughout the film, sequences whose point entirely escapes me. I note that, according to the director, he didn’t get paid a penny for its inclusion in the collection. Fortunately, I didn’t pay a penny for this collection, so I guess that makes us even.