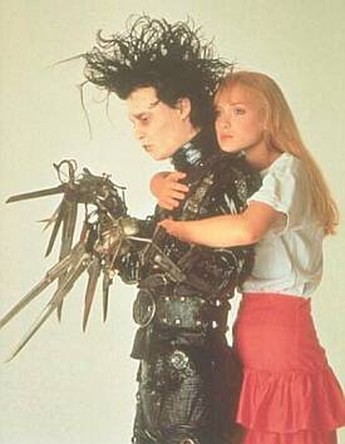 Much has been made of the similarities between this and Sweeney Todd, but in the Burton canon, this is likely closer to Willie Wonka: a misfit with a single remarkable talent but questionable social skills is forced to interact with the rest of the world, but finds one person who actually “gets” him. The ending here is significantly darker however; perhaps Burton’s ongoing relationship with Helena Bonham-Carter (which just produced its second child), has made the director lean towards happier endings? Really, have to say that this is probably still among his greatest works; it generates a magical world, where a towering Gothic castle can lurk, literally, at the end of a street of suburban houses – yet no-one really notices it, except when necessary to the plot.

A decade later, with Depp now an icon for Jack Sparrow, he’s basically unrecognisable, and gives a performance of great pathos, despite looking like Emo Boy from Hell. Much credit must also be given to production designer Bo Welch and, of course, regular Burton collaborator Danny Elfman, for his score which captures beautifully the magical, yet sorrowful, spirit of the movie. The supporting performances are generally very good too, particularly Wiest, who shines as the loving mother, who acts out of compassion, without perhaps thinking of all the consequences. It’s a somewhat odd moral here, that seems to preaching tolerance, yet the only real solution ends up being violence. Regardless, if you can suppress a sniffle at the end, you’re a better man than I. 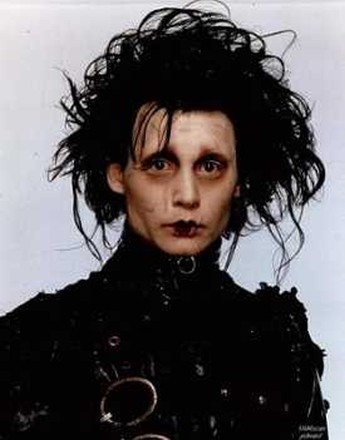 What we wrote then [10] The modified version of the 20th Century Fox logo which opens this film promises a magical, weird experience and Burton finally delivers in spades what’s been visible in flashes through the rest of his career, It’s one of the most beautiful films I’ve seen, right up there with Legend, and quite restores my faith in Hollywood. Depp, to my surprise, is very good in the title role, a Quasimodo/Frankenstein type with shears instead of hands, rescued by an Avon lady from his castle home. He then takes up topiary and hairdressing, although things go wrong when he’s led astray by the girl he loves (Ryder, finally hitting puberty at 18 and filling out nicely!).

The first half is generally comic, with most attempts at subtlety sharply cut off by amusing but annoying humour. Complemented by Danny Elfman’s score, the second part cuts the comedy and is superb, containing perfect moments such as Edward’s sculpting of an ice angel which sent a shiver down my spine. The story-telling isn’t faultless – important elements are thrown in almost casually – but everything else, right down to the set design, is nearly without flaw. 9/10