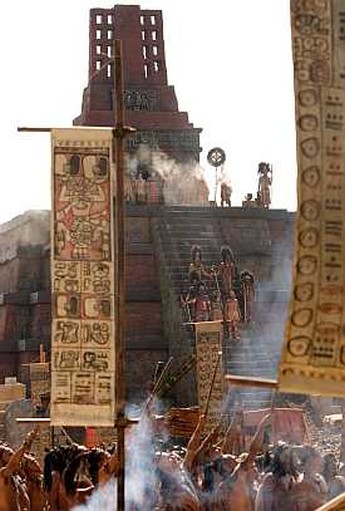 Save his debut, pretty much everything Gibson has directed has been a) historical, b) hyperviolent and c) ripe with modern metaphors, one way or another. I guess you could also add “relentlessly macho” to the list, depending on your view of Jesus Christ, and that would reflect most of the characters Gibson has played, from Mad Max through Martin Riggs and Hamlet to Payback‘s Porter. Here, the hero is young Mayan hunter Jaguar Paw (Youngblood) whose village is raided by the malevolent Zero Wolf (Trujillo), and he is carted off to become another in an ongoing series of human sacrifices, intended to appease the gods. Can he escape that fate, and return to his village, ti save his heavily-pregnant wife, who is stuck at the bottom of a well?

There are obvious attempts to link this to the current state of things, most obviously an opening quotation from Ariel Durant which portentously tells us that, “A great civilisation is not conquered from without until it has destroyed itself from within.” Though he was talking about Rome, and the Mayan culture had been in decline for about six centuries by the time the conquistadors arrive. So best not look for historical accuracy, since this is largely straightforward action cinema. There’s little doubt about who is good or bad, with only Zero Wolf possessing any grey at all [as well as some of the best ear-rings and other decorations ever sported in cinema history]. This works well, for the most part, though at 140 minutes, could perhaps have used some trimming. The Mayan cityscape is perhaps the high-point of the film, though I confess I was expecting to see a Predator on top of the pyramid, not a high priest. Er, just me, then.

Subtlety is not this film’s strong point, right from the opening scene where a tribesman is fooled into eating tapir testicles for fertility purposes. From there on, throats are slit, impalements abound, and severed heads bounce down steps like some kind of Ed Gein approved Slinky. Some critics have said this is cultural pornography, for it ignores the aspects of Mayan culture such are art or astronomy: however, that’s like criticiing Schindler’s List because it doesn’t mention that the Nazis made the trains run on time. Historical accuracy and even-handedness will always suffer when it comes into conflict with cinema. What matters is whether it works on film, and if this perhaps lacked the emotional core of Braveheart, that might be because I’m Scottish, rather than Native American.