Although these are two separate films, released five months apart, they are effectively one. If you haven’t seen the first, the second – which follows on immediately from the cliff-hanger ending of its predecessor – will make absolutely no sense. It’s a slice of SF/action, telling the story of a group of e-sportsmen, who win a tournament and receive as prizes advance copies of a hot new computer game. Turns out, when installed, this fries their hardware: however, it also fries their brains, converting gaming talents into real world attributes. For instance, Max (Bardukov), is great at fighting games: he acquires mad combat skills after exposure to the software. Vampire (Chirkov) becomes a crack shot. And, so on. 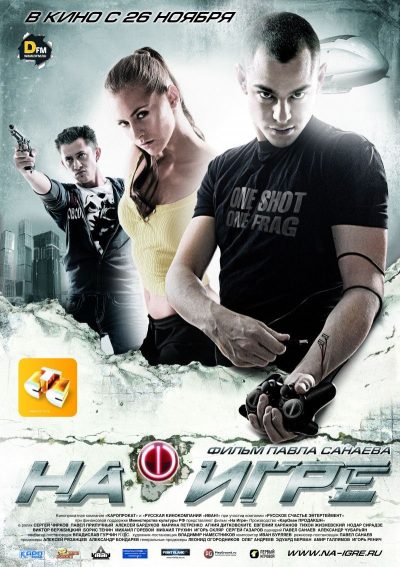 Initially, they consider this upgrade awesome, needless to say. However, the young men find themselves embroiled in a plot to use the software to destabilize Bolivia, and take control of its natural resources. They no longer are left to act on their own, but become pawns in a larger game. Vampire has had qualms from the start, and when he realizes they’re being manipulated, wants no part of things, and would rather destroy the rest of the software,  preventing it from being misused. Convincing the rest of his pals this is the wisest approach is going to be the first hurdle. Considering they’re jetting around the world in the villain’s giant, white airship, that won’t be easy.

The first half is enormously stronger than the second. It opens with a bang, Vampire and his crew taking on a local gang of thugs, as they seek to use their new-found skills for profit. Needless to say, the mobsters are unimpressed by extortion attempts from a bunch of nerds… The film then goes into flashback mode, showing us how we get to that point. Things probably reaches their peak with a strikingly well-crafted action sequence in which they raid the warehouse where Max is about to be fed into an industrial oven. The ease of transition from paintball guns to the real thing, is as much scary as anything, and Sanaev seems to be making a point about video-game desensitization; after the battle, our heroes excitedly compare their number of “frags”.

It can’t sustain the inventiveness or energy, however – to such an extent, you’d be as well not to bother at all with the second part. I was expecting this to build on the foundation of the second, perhaps have more “upgraded” combatants, so we could enjoy some solid PvP action. Doesn’t happen. It’s an idea practically begging for further development, and characters all but entirely limited to 16-25 males. There’s a token woman, who gets to drive a bit. I’m slightly surprised her special talent didn’t involve being really good at farming things, or arranging them into lines of three. [Though given the hours I’ve spent on Bejeweled Blitz and its variants, I can hardly throw shade!] As a result, it fizzles out entirely, and has to be considered a lost opportunity at making a “true” cyberpunk movie – something which remains rare.