Certainly the title of the year, it’s probably inevitable that the film doesn’t live up to it. How could it? More troublingly, it doesn’t even bother trying. It would be reasonable to expect a film along the lines of Abraham Lincoln, Vampire Hunter. Instead, you get something which is more sombre, reflective and… well, let’s be honest, plodding. Calvin Barr (Elliott) is living out his twilight years in a small town. He is constantly harking back to when he was a young man (Turner), who has been carrying the secret of his deadly assassination mission for decades, as well as mourning his lost love (FitzGerald). Not everyone has forgotten though, and Barr still has those necessary skills which allowed him to kill the Fuehrer. The government comes calling for a final mission: track down and kill Bigfoot, who is carrying a lethal plague with the potential to devastate humanity. 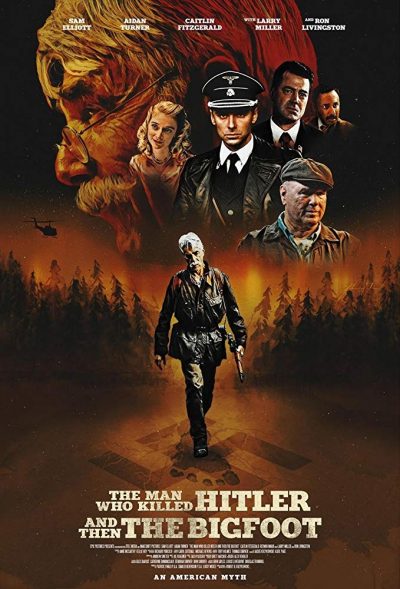 It seems to be aiming for something between Big Fish and a quirky, Coen Brothers-styled character drama. You’d expect the killings of Hitler and the Bigfoot to be tentpole events – the title defines Barr in terms of them – yet when they happen, they are presented in almost humdrum terms. Elliott is fine, and manages to do a lot with a character who is just not given enough to do (which, considering the synopsis in the previous paragraph, is almost impressive). The film sets up questions, then doesn’t bother answering them, e.g. what’s in the mysterious box Calvin keeps underneath his bed, and then has buried? The entire exercise feels more like a cinematic shaggy-dog story, where the makers are in on the joke, and the audience isn’t.

It’s simply far too thoughtful for a movie with this title, being more a ponderous reflection on growing old, mortality and lost opportunities. And not a particularly good one at that, though Elliott’s placid to the point of deadpan performance saves it from being a total disaster. This is just not anywhere near as much fun as a movie possessing the title should be. I’d have come up with a tongue-in-cheek romp through history, with Barr telling implausible stories of his derring-do, which may be authentic, or the doddering fabrications of an aging mind. A modern take on Baron Munchausen, in other words, is what I was expecting.

There’s no such straddling of the line between reality and imagination. The title turns out to be 100% accurate, though both events are so humdrum as to leave you waiting for a punchline that never comes. Bigfoot being Hitler in a costume might have worked. I did enjoy the brawl between Barr and the Bigfoot, which comes across somewhere between The Revenant and They Live. However, moments like that are outnumbered handily by the lengthy scenes which serve no apparent purpose, for example the discussion between young Barr and a Russian ally. They should have called this An Old Guy Looks Back. It would have saved everyone a great deal of trouble.