“Are you here to ask me about that horrible thing I saw?” 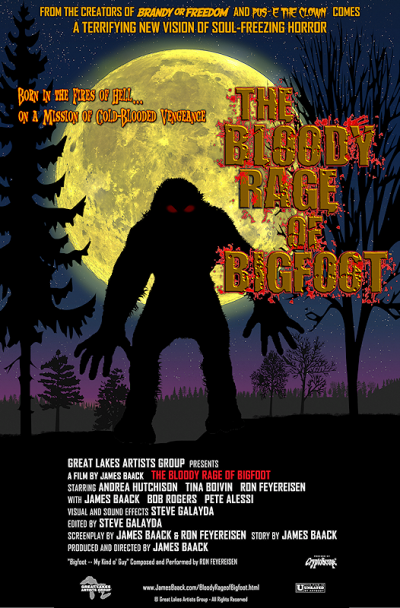 The hero here is Vernon Knutson (Feyereisen), whom we first meet locked up in the “Crooked Hollow Sanitarium”, spinning the subsequent tale of occult practices, cryptozoology and murder. Vernon became obsessed with taking revenge on the Bigfoot after it killed his wife. His main antagonists are a pair of witches, Loosey-Fur (Boivin) and Satantha (Hutchinson), who break out of prison, and are responsible for resurrecting the corpse of Bigfoot, and unleashing it on a reign of terror around the local area.

Which sounds considerably more entertaining than it is. For do you know what probably the worst thing it? The Bloody Rage of Bigfoot runs for 147 minutes. Yes, you read that correctly. One. Hundred. And. Forty-Seven. Once Upon a Time in the West is shorter. So are Inception, Pulp Fiction, The Departed and The Good, the Bad and the Ugly – none of which are noted for their brevity. Most zero-budget horror films go the other way, doing the bare minimum to reach feature length. “Fuck that,” says Baack, deciding instead to make the Shoah of zero-budget horror.

You get the sense every single second of footage shot ended up in the movie, relevant or not, competent or not. Nothing brings this home better than an early scene where Satantha and Loosey-fur escape from ARKANSAS WOMEN’S PRISON (we know, because it’s written on the back of their shirts). They stage a home-invasion, the impact of which is only slightly diminished by the victim being unable to stop grinning or looking at the camera (below). After taking his car keys, they leave – both ending up on the driver’s side of their getaway vehicle. Any normal film-maker would yell “Cut,” but Baack is made of stronger stuff. He leaves it in the finished film, complete with one actress yelling at the other, “You went to the wrong side of the car!”

Editing. It’s a thing. This apparently comes as news to Baack. It would be an interesting exercise to take this 147-minute version, and edit it down to a crisp 85 minutes. I really don’t think it would be an issue. Entire chunks could easily be excised, because they serve no actual purpose. For instance, the thread starting with a lengthy scene of teenage girls chatting, two of whom decide to get a love spell from the local witch. After a brief interlude when they suddenly switch to speaking Polish, they show up at the witch’s house, where the film goes all black and white/solarized for a bit, and we get multiple examples of zooming in on a freeze-frame, which appears to be another Baack trademark.

Thoroughly creepy clown Pus-E and his sidekick Slappy are also waiting for the witch, and they “entertain” the teenagers with a “comedy” “magic” show. All quotes used advisedly, since it truly is the stuff of nightmares. “This is funny stuff!” yells Pus-E, to which one of their audience/victims replies, entirely accurately, “No, it’s not…” Because it ends with Slappy shooting himself in the head. As the old joke says, “It’s a great trick, but he can only do it once.” In another film – such as Circus of the Dead – this would have been a great fit. Here, it’s entirely irrelevant. Pus-E is played by Feyereisen, but why the character is present at all is never explained.

Even the scenes which matter are desperately in need of cutting. There’s one involving Vernon sitting in a bar (although it’s not really a bar, just someone’s house). He’s there trying to read a book in Latin, and meets another customer, Sebastian Lance (Baack), who happens to be a cryptozoologist, and offers to help Vernon find Bigfoot. It should take about one minute, two tops, to expound all relevant information – including probably the film’s best line, heading this section. The scene actually lasts over twelve minutes.

“I see a large pile of fecal matter.”

Not helping matters, is that I’ve no idea when stuff was taking place. Ok, I get that Vernon is telling a story in flashback. But beyond that, the order in which stuff happens makes no sense. Why were Satantha and Loosey-fur in prison to begin with? Who buried the body of Bigfoot in the corner of a suburban cemetery? When the witches go to dig up the corpse, why Satantha is carrying a lantern doesn’t initially make sense either. Then, between shots, it goes from broad daylight to the middle of the night, so she was clearly planning ahead. Fortunately, a brazier has also sprung up – guess they cast Summon Hibachi – allowing for the least convincing imitation of “Digging a hole” in cinematic history.

The witches celebrate their body-snatching success by going to the same bar as Vernon – with a birthday cake apparently belonging to someone called Andrea, going by the icing written on it. They pick up a guy, with the promise of a threesome, go back to their garage, where Satantha “dances” for him. Again, quotes used advisedly. since I’ve seen more energy and enthusiasm from my granny. And she’s been dead for thirty years. He gets dismembered with a hedge-trimmer (below), as we unexpectedly enter the “spree killing” part of proceedings. Even by the loose standards of coherence thus far, things get a bit confusing at this point.

What the film calls “The world’s worst news reporter”, Jack Talon, becomes the witches’ next victim. The person playing Talon is the best actor in the film, for Talon undeniably comes over as the world’s worst news reporter. Alternatively, he could be the suckiest actor in the film, with the performance so entirely inadequate even Baack had to find some kind of explanation. You could argue either way, such is the beauty of this kind of movie. Regardless, Bigfoot seems forgotten, replaced by some light lesbian canoodling. Though it falls WAY short of Baack’s claim to “heat up the screen enough to call the fire department.” Either he or his actresses apparently got feet so cold, they must have lost several toes to frostbite. 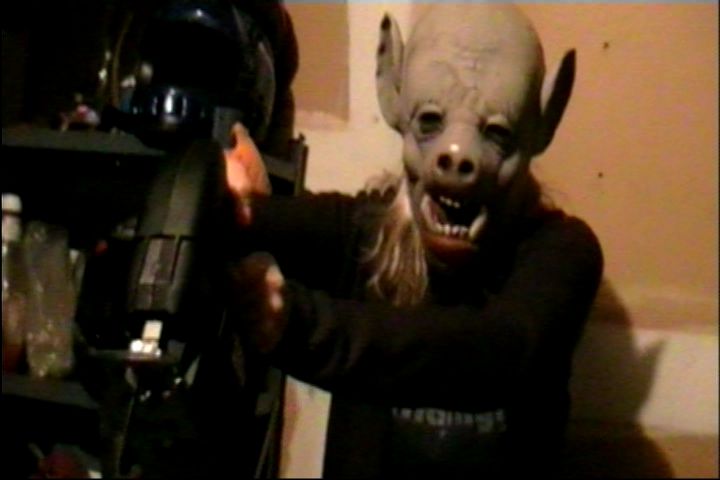 “Enough of this childish shit!”

Returning somewhat on track, Verne goes to see another practitioner of the dark arts. Riggy Mortis, who creates a medallion which glows when Bigfoot is near. Yep, Verne is still trying to find the Bigfoot by magical means rather than – oh, I dunno – “Looking for it”. Whatever. Riggy is helped by Satantha and Loosey-fur, and it turns out they’re keeping Bigfoot chained up in the basement, because… Oh, hey. The camera has drifted out of focus. Again. Before long, with the authorities apparently closing in, the two witches let Bigfoot out to wreak havoc and distract the police. Following the ensuing carnage – almost entirely off-screen – the local Mayor hires Sebastian and “Sugar Bad Jones” to hunt down and end the threat.

Jones is a specialist in taking out “Big, ugly creatures of the night. Werewolves, vampires, aliens, mummies – I even took down a fucking dinosaur.” Early on in shooting, the director was calling this character a “he”, so I guess things changed a bit subsequently. Probably for the better, as Stephens brings a pleasant Pam Grier-like vibe to the character, and unlike just about everyone else, isn’t suffering from a severe case of verbal dysentery, preferring instead to let her actions do the talking. She also leaves the movie by simply wandering out of a scene, never to be seen again. Got to love that.

The final 30 minutes mostly sees Vernon, Sebasatian and Sugar Bad meandering slowly through the woods in search of Bigfoot. The cinematic climax is, instead, a gun-battle between Verne and the two witches, who happen to be casually sitting at a picnic table nearby, waving their guns around and discussing spaghetti. I shit you not. Satantha is shot, Loosey-fur dies of grief (I guess) next to her, and Vernon gets to meet the creature of his obsession. Who is apparently sick with rabies, so our hero doesn’t even get to extract his revenge.

Yes, the entire movie has been a complete waste of time for its lead character. It couldn’t possibly get more self-referential than that.

“You’ve got to be kidding me, man! This is STUPID!”

This film appears to have mutated quite considerably. Back in March 2009, the original synopsis was: “Bigfoot contracts rabies from a half-dead raccoon hit by a car. As the rabies progresses, so does the deterioration of his mind. He wanders deep into the woods and encounters a Ku Klux Klan / Militia Group. At the same time, a group of young Goth girls from a local high school are experimenting with black magic and conjure up a hideous demon that is even MORE blood thirsty than a rabid Bigfoot.” It was supposed to end in a battle between the two. Mind you, Baack was also promising “quite possibly the bloodiest film of all time,” and it was going to be shot in 3D. Nope and nope.

Let me begin wrapping up by listing a few other random things, dialogue or images I noted during my consumption of this…. thing.

Yet despite many, many problems, The Bloody Rage of Bigfoot is not unwatchable. Indeed, it wasn’t even the worst Bigfoot movie watched this week, being considerably less soporific than The Man Who Killed Hitler And Then The Bigfoot. I was genuinely surprised at how quickly the time went by, even as some of the scenes proceeded with a glacial abandon. Feyereisen was decent as a hero, while both Boivin and Hutchinson gave the witches a kind of trashy sensibility that was fun. I sense a couple of wine coolers, and Satantha and Loosey-fur would be anyone’s minions, not just Satan’s. If you know what I mean and I think you do…

That said, most of the entertainment value here is still to be found laughing at the film, rather than with it. There are just not enough moments where the film is in on the joke. This is when it’s at its most successful – or perhaps more accurately, least unsuccessful – effectively negating complaints about its staggeringly shoddy production values, by embracing them. Instead, the most memorable thing about the entire film is perhaps Baack’s amazing self-confidence, apparent in the belief that not only would people want to watch this, they’d want to watch 147 minutes of it. 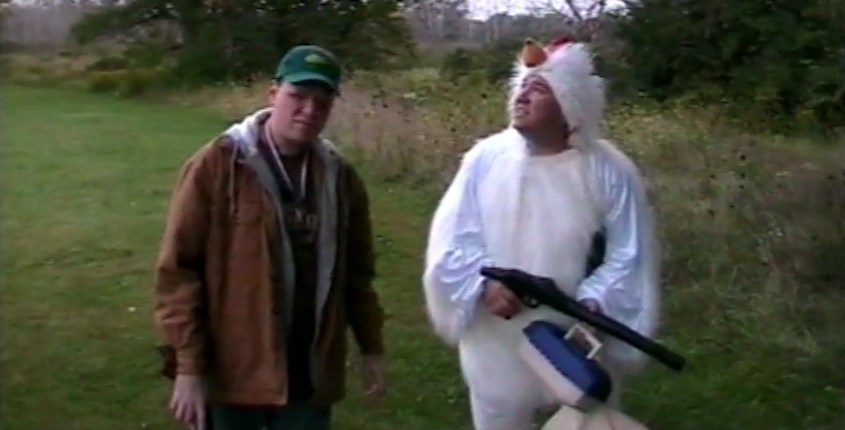