It’s a surprise that it took so long for someone to produce a shameless rip-off of Harry Potter. While such things have been done in the literary world [most infamously, Russian series Tanya Grotter], even the Asylum – creators of such works as Transmorphers, I am Omega and the all-time classic, Snakes on a Train – haven’t ventured into the boy-wizard arena. It took the unlikely combination of a pro wrestling legend and, it appears, a community theatre group, for this to be realized.

I kid not. While one can understand the children not having much cinematic experience, the official website for the movie reveals that most of the adults are not exactly professionals. For example, one is a telephone engineer; another “pursued a career in human resources”; a third is a police sergeant. Rarely has a the phrase “don’t give up your day job,” applied to virtually the entire cast of a movie. Few have any other film experience listed in the IMDB, except for a couple who appeared in McNabb’s previous films Study Hell and Blind Eye.

Worth mentioning those movies because, while they weren’t very good by most objective standards, they seem like Lord of the Rings when put beside Billy Owens. This seems to show that the issue is not necessarily McNabb, so much as a script which is a babbling mess. If you took all six Potter films to date, added The Goonies, and assigned a monkey to select 70 minutes of scenes from them at random, you’d get something which would be a tower of coherence compared to this. It’s generally a rule of thumb that the more voice-over you need to explain your film, the worse your script. This probably sets an all-time record for the amount of expository monologue: it’s more like an audio-book with pictures than a ‘proper’ film. 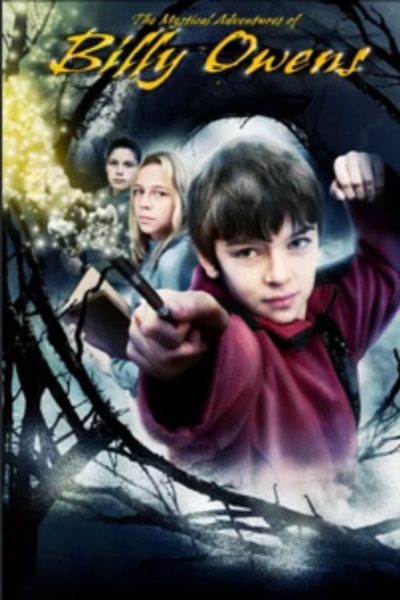 It’s delivered by Hermione, sorry, I mean, Mandy. Such confusion is understandable, since Barry Hopper, er, Billy Owens, has two friends with whom he hangs out. One is a boy and largely forgettable, the other is female and a know-it-all. In other words, exactly like JK Rowling’s hero. What are the odds? The performances are exactly the level you would expect, and mainly serve to make you realize how good – or, at least, non-irritating – Daniel Radcliffe et al are in their roles. As noted, you really can’t blame them: if I’d been asked to star in a film at age 11, I’d not have been found touting my inexperience.

For the adult actors, the Potter saga has Oscar-nominees like Richard Harris, Ralph Fiennes and Maggie Smith. This has… Roddy Piper – and unlike the kids, he is old enough to know better.  We have always had a lot of time for Mr. Piper, even outside the wrestling ring. They Live is probably John Carpenter’s second-best film [behind The Thing and – Rob Dyer’s going to kill me for saying this – ahead of Halloween], and we’ve seen a number of other B-movies where he has been the finest thing about them, most recently, Ghosts of Goldfield. But he is wildly miscast as the owner of the mystical shop where Gary Kotter Billy Owens finds the magic-wand, which sets the plot in motion. It’s a role made for a veteran Brit with presence, someone like the late Peter Cushing. So what the hell is Piper doing in the part?

The most likely explanation is that he lives locally, because it seems everyone else from Sarnia, the Ontario town where this was shot, gets to appear. This is apparent from an end-credit sequence which lasts around ten minutes, listing individually and on a line of their own, each person who had the slightest thing to do with the movie, right down to the extras. Now, as a community building project, this is a cool concept and by no means a bad idea. However, that does not mean that anyone outside Sarnia gives a shit. The credits do have a positive impact, in that they shorten the running time of the actual movie significantly. This can only be a good thing.

700 words in, and I haven’t mentioned the plot. There’s a good reason for this: I am actively avoiding it. But I’ll try my bet. It’s the eleventh birthday of Larry Wotter Billy Owens, and while running away from a school bully, he ends up in the shop owned by William Thurgood (Piper). There, he finds himself strangely attracted to a wand, on which he spends his birthday cash, and discovers it indeed has magical powers. This is fortunate, since he’s the only one who can save the town of Spirit River from the dragon buried underneath the river, which the evil Mr. Mould is trying to release. He has to make his way past… mystical guardians and… a bunch of other stuff, in order to ensure that… doesn’t happen.

Yeah, not quite my finest synopsis. However, I’d rather be vague than wrong, and this storyline is so badly put-together I would be guessing if I were to be more specific. However, must say, the climactic encounter with the dragon is extremely memorable – albeit for all the wrong reasons. You remember the Windows 3.1 screen-saver with a logo bouncing off the edges of the screen? That’s how the dragon moves, and is a good approximation of the graphics quality too. Just a thought: when you are obviously incapable of delivering anything even approximating to a dragon, it might be a good idea, oh, not to put one as a key element in your script.

In its defense, some elements are not taken from Potter. They are, instead, lifted from a pre-pubescent version of Buffy the Vampire Slayer. Billy has to come to terms with his new found ability, while his parents live – apparently – in blissful oblivion. And, just like Buffy found unlikely allies at her school, so does Billy. As Joss Whedon showed, this could be a source of well-crafted drama, blended with action and comedy into a delicious, frothy frappe. However, as Brian McNabb shows, it can also be an incoherent lump, littered with WtF? moments that are the main source of entertainment (thankfully copious), performances less delivered than carved from the finest mahogany, and possessing production values your local panto production of Peter Pan would reject.

JK Rowling should sue. Not for any particular legal reason, just with the aim of stopping the makers from producing the threatened sequel [which, to my horror, the IMDB reports as being in post-production, and the official website says premiered last November]. The world would thank her for this, at least as much as for any of her books.