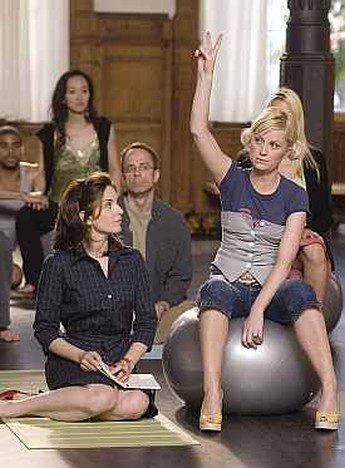 The premise involved in this movie is one which is horribly flawed from my perspective. Why would someone want a baby to begin with, never mind paying large sums of money to make sure they got on? The film opens with any number of shots of “adorable” little tots, which assume you have already bought into this flawed philosophy – the rest of us simple see noisy, messy 18-year prison sentences that eat all your money. Yeah. safe to say, I am not quite the target audience for this movie. Given this major hurdle, it is somewhat surprising to report that the film does not entirely suck. Sure, the plot offers as many surprises as last year’s Christmas presents and possesses so much artificial sweetness it would probably cause bladder cancer in lab rats. But it actually offers some genuine laughs, most of them coming from Amy Poehler as Angie, the white-trash hired by Tina Fey’s yuppie executive Kate to act as a surrogate mother. After boyfriend trouble, the two end up moving in together, and if the line “hilarity ensues” is a bit excessive, it is more entertaining than I expected.

Of the two SNL alumni, Fey is the straight-faced one, which was somewhat surprising, having seen her and Poehler as Sarah Palin and Katie Couric.The most effective moments are the culture clash between the two woman – one, working for a health-food company, the other whose idea of health-food is Cheetos. Meanwhile, Kate has fallen for a juice-bar owner, and Angie’s common-law other half threatens to derail the entire proceeding. It’s never exactly challenging, going for the safe laugh but the two leads have good chemistry that makes it painless enough to watch. The efforts to generate dramatic tension are completely useless, and if you can’t tell how this is going to end, you haven’t paid attention to the formulaic nonsense churned out by Hollywood. Not worth spending anything on this, except 95 minutes of your time.