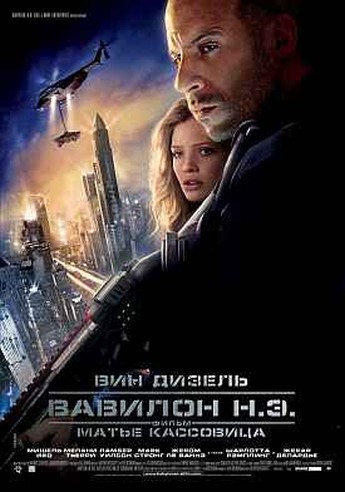 Remember when Vin Diesel was set to be the Next Big Action Star? Somewhere between The Fast and Furious and XXX, his popularity peaked, and we are among the few people who loved The Chronicles of Riddick. Now… Well, on the strength of this confused mess, he won’t be back on top of the heap anytime soon. He plays Toorop, a mercenary hired to take a girl, Aurora (Thierry), and her foster mother (Yeoh) from a Mongolian convent to New York, where a religious order will her to promote their beliefs. However, en route, Toorop begins to realize there are bigger things going on than his self-interest, and questions whether he should complete his mission and deliver Aurora to her appointed destination.

Kassovitz largely disowned this, citing studio intervention, but in all honesty, it’s hard to see what they could have done to make such an incoherent mess. This, of course, does not necessarily mean that it’s unentertaining. As visual eye-candy goes, it’s an impressive view of the future, albeit one heavily-influenced by Blade Runner, all neon and decay, a degenerate landscape through which Toorop strides. However, it’s barely coherent – for instance, one second they’re crossing the Bering Strait, the next arriving in New York. Charlotte Rampling becomes the latest English actress to slum it in an action pic, but at least gets to do something; poor Michelle Yeoh is criminally wasted here. It’s passable entertainment, especially when Vin is not given anything more to do than look menacing, something he can probably do in his sleep. However, the big difference between this and Riddick is that the latter had no pretensions to be other than big, noisy and violent, and was all the better for it.