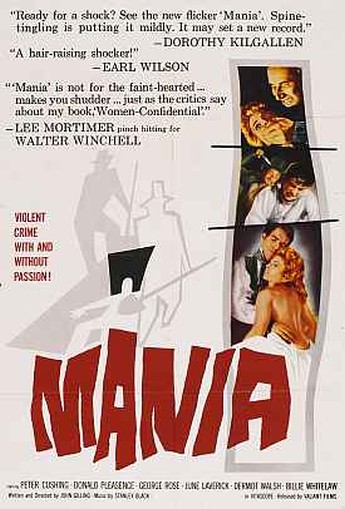 In the 1800’s, the only legal way for medical professors to get cadavers for educational purposes was from hanged criminals; a grey market grew as a result, with “resurrectionists” taking bodies from graves and selling them to schools. In Edinburgh, a couple of lowlifes, Burke and Hare (Pleasence) took to this profession – with a twist. To ensure their cadavers were fresh and received the highest price, they created them, murdering other members of the underclass and selling the corpses to Dr. Knox (Cushing), a respected teacher at the university. Which goes very well for them, until the dead bodies start to get recognized, such as Mary Patterson (Whitelaw), the good-time girlfriend of one of the local students. The heat then starts getting turned up on the pair, by forces both official and more impromptu. How far up the chain will the legal repercussions go?

More or less an unofficial version of the Dylan Thomas play, The Doctor and the Devils, Cushing is, as ever, excellent. He was clearly chosen for the role on the strength of his portrayal of Baron Frankenstein in the Hammer classic a couple of years previously. Like the Baron, Doctor Knox is a driven scientist, who refuses to let anything get in the way of knowledge; however, he is somewhat wiser, using Burke and Hare as a cutout, to provide “plausible deniability.” It also works somewhat as a class-war piece, with Patterson’s efforts to cross the social divide sadly ineffectual. Add in various other well-known British names (Andrew Faulds as the police inspector, and future sitcom star Melvyn Hayes as a retard – he also played the young Frankenstein in Hammer’s film), and you’ve got something which feels not as dated as it might, despite an obviously more restrained approach to the subject matter, and some seriously flaky Scottish accents.