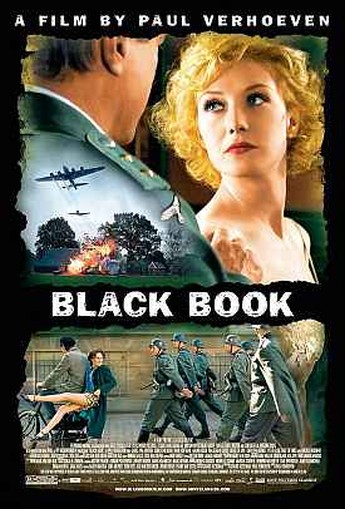 This film marks Verhoeven’s return to his native Netherlands, after two decades in Hollywood of variable success. He’d been working with long-time collaborator Gerard Soeteman on the script for a long time, and it has more than certain echoes of their previous work, Soldier of Orange. Again, it’s set in occupied Holland during World War II, with Rachel Stein (van Houten), a Jewess hiding out from the Nazis. After her family is gunned down trying to escape, she joins the resistance and is tasked with getting close to a local German officer Ludwig Müntze (Koch) [this being a Verhoeven film, I needn’t detail what “close” means, I trust. Let’s just say, Rachel’s hair-dye doesn’t stop at her head.] Muntze has agreed to a secret truce with the resistance, promising them no reprisals against the locals in exchange for no attacks. However, another Nazi, Waldemar Kobus, has no such plans – and Rachel also recognizes him as involved in the death of her family.

As often before, Verhoeven avoids portraying things in black and white: while a Nazi, Müntze is shown as basically a decent guy, and the resistance members, in contrast, are not uniformly heroic – indeed, may be less moral than Müntze. The press at home were less impressed with this approach, and presumably, the post-war sequences in which those perceived as collaborators were abused by their countrymen, (whether or not they actually were. Verhoeven has also delivered an excellent heroine: Stein is brave, resourceful and intelligent, to the extent I contemplated reviewing this on girlswithguns.org; since she doesn’t actually wield a weapon, it was just too much of a stretch. The most expensive Dutch production ever, and it shows – with a big-budget background, few better than Verhoeven to handle the epic scale – and I note van Houten as the latest femme fatale of similar physical type [at least, here, after she’s dyed her hair] in his films, stretching back past Sharon Stone to Renee Soutendijk in The Fourth Man.

The script does seem a little too bitty, with some scenes that don’t flow well into each other, and there are bookending sequences in Israel, which are completely redundant, especially in a film that’s already 145 minutes. It appears to be an effort to link World War II to the Middle East conflict. It doesn’t work. However, most of this is engrossing and effective cinema. It’s probably the best war film I’ve seen since Saving Private Ryan: it took six years for Verhoeven to go from Hollow Man to this, so let’s hope it’s not another six before his next.