I went into this with low expectations, so it’s a bit of a double-edged sword to say that the film met them. It probably helps that I only barely remember the Brendan Fraser series. The only thing about it which seems to have stuck in my mind is the fantastically bad CGI putting The Rock’s face on an arachnid’s body in The Scorpion King. [Even by the low bar of CGI in 2002, it wasn’t good at the time, and has not improved with age] It certainly seems this version is going down the same, action-packed road, rather than any of the previous (re)incarnations. 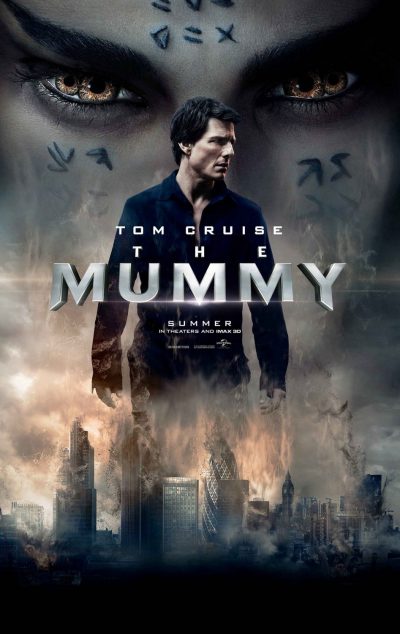 This is probably wise: mummies were always the least interesting of the Universal monsters, desperately in need of something to beef them up.  Not sure this is it, however. Especially when the efforts here at franchise creation are painfully clear. Most obvious, is the shoehorning of Dr. Jekyll (Crowe) into the story for no real purpose – except to show off a lair populated with artifacts from other films, like a skull with vampire fangs and what appears to be the hands of the Creature from the Black Lagoon.  His presence reminded me more of another misbegotten monster mash, 2003’s The League of Extraordinary Gentlemen. When the film is happy to be its own thing, it’s by no means terrible. Bland and hardly ground-breaking, to be sure, with Cruise capable of doing this kind of thing in his sleep.

Yet it was adequately large-scale, Boutella (last seen bouncing around on running blades in Kingsman) makes for a decent alternative to Arnold Vosloo, and Wallis… I’m sure she does something to justify her presence in the film, though I’m not prepared to swear to precise details. It starts off in Iraq, where scout/tomb raider Nick Morton (Cruise) and his former lover/legit archaeologist Jenny Halsey (Wallis) literally falls into an Egyptian tomb. Which is weird, ‘cos Iraq. Turns out the Egyptians didn’t want anything to do with the mad royal bitch buried there, entombing her in a far-off vat of liquid mercury after she sold her soul to Set and murdered her family. And as we see on the flight back to London, they weren’t wrong. She returns to sorta-life, and makes Nick an indestructible toy, with the aim of completing her interrupted ritual and using him as a vessel for Set.

I feel like the film maybe slipped some Rohypnol into the Grand Canyon Pilsner I enjoyed during it. For I have only vague opinions about the film, rather than specific beliefs. I can’t point to many particular scenes as “That was good/bad.” The plane crash was well-staged; it won’t be appearing as an in-flight movie any time soon, that’s for sure. The two-pupils thing was creepy. And Nick’s dead sidekick turning up to offer helpful advice has me hoping that part of the studio’s “Dark Universe” will be An American Werewolf in London. [Wikipedia informs me that was a production of now-defunct Polygram, so I’ve no idea where the rights now reside] Otherwise… I suspect it will take considerably less than Brendan Fraser’s 15 years for this to be completely forgotten. Probably around 14¾ years less.