A striking contrast to the hippy-dippy nonsense which was Arrival, this tale of first contact does not see humanity attempt to communicate with, learn from, or otherwise peacefully engage the extra-terrestrials. That’s because said alien is single-mindedly attempting to kill everyone in its path. And it is very good at its self-appointed task. Things begin innocuously enough, with the crew of the International Space Station accepting delivery of soil samples returned from an expedition to Mars. The team’s exobiologist, Hugh Derry, finds a dormant cell, and revives it, bringing humanity undeniable proof of life elsewhere. 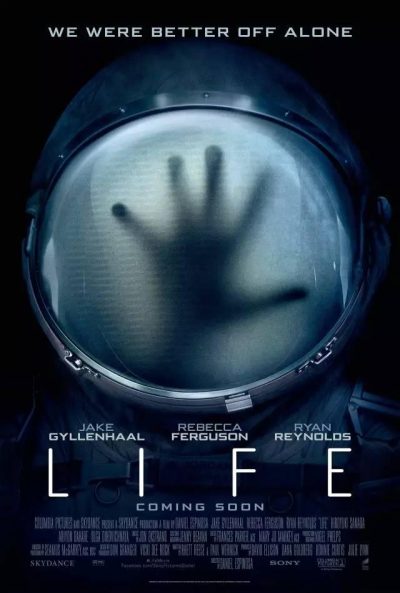 Named “Calvin” – after the president, rather than the comic-strip character – the creature falls into a dormant state, Derry attempts to revive it by administering electric shocks. Ok, so what genius though it would be a good idea to taze the sleeping extra-terrestrial life-form? For Calvin wakes up, and is about as happy as I would be, if someone interrupted my slumber with a jolt of 240V across my nipples. It grows at a phenomenal rate, and also becomes super-aggressive. With communication between the station and Earth cut off because… reasons, the crew are left to fend for themselves, trying both to survive and prevent Calvin from potentially finding a new home in the solar system.

It’s been a long time since I’ve seen such a straightforward, “It came from space and is very, very pissed-off” film. The grand-daddy of them all is, of course, John Carpenter’s The Thing, and this shares a similarly shape-shifting critter – though this one doesn’t bother attempting to imitate humans. “Say it loud: I’m alien and I’m proud,” seems to be its tenticular approach, and its lack of bones allows it to squeeze through just about any aperture. Good luck keeping such a creature out, especially one which (again, for… reasons) appears to be energetically hostile to carbon-based life-forms, with an enthusiasm not entirely explicable by the electro-shock therapy administered earlier.

The film starts with a bravura single shot that pans around the zero-g environment, the makers clearly having seen Gravity. Overall, this is a little short of both that, and the other film of which I was reminded, Europa Report (sharing the latter’s prosaic attitude and approach to space travel), mostly because the characters are forgettable, to the point I can’t even remember a single name. When things come undone in the second half, I could have used some kind of map, as one ISS module looks pretty much like another, when someone is cowering in the corner.

All told though, I had a small-scale blast with a film that doesn’t aim higher than “spam in a space-station”, and concentrates on delivering that effectively. Calvin is an undeniably creepy creation, the stuff of nightmares and too much pepperoni pizza, and the film does not stint on cranking up both the terror and the gore. Though the bit which got me cringing most, was seeing what it did to Derry’s extremity. Calvin possesses a very firm handshake, let’s just say…