This fifties documentary presents a compelling case for the dangers of letting women do science. Because it inevitably leads to trees roaming the countryside, picking up people and throwing them into pits of quicksand. This is a threat which cannot be over-stated, but fortunately, we can avoid it, by ensuring women remain in their proper place. Not sure quite where that is – the film is somewhat vague on specifics – but it clearly is not the laboratory. 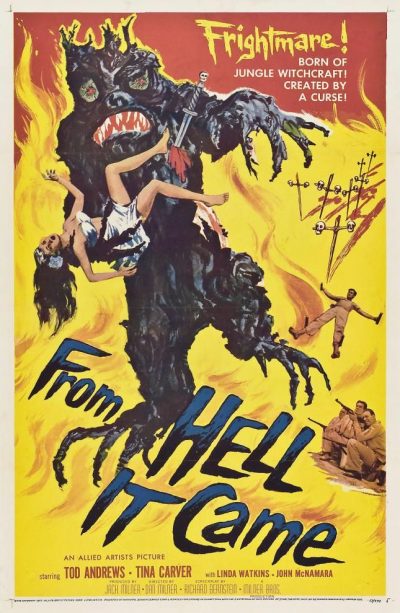 This occupies an odd middle-ground between films like Voodoo Island and Voodoo Woman, both made the same year, and nuclear threat movies such as Them! or The Beast from 20,000 Fathoms. Our white saviors are sent to monitor an island downwind of an atomic testing ground, only to find an outbreak of plague. Some of the locals are grateful for the medical help, led by Kimo. Others resent the intrusion, and Kimo ends up framed for murder, and buried in a wooden coffin with a tribal dagger in his heart, albeit not before cursing those responsible. Combined with the radiation, this somehow (specifics are not this film’s strong suit) turns him into Tabanga, a giant radioactive shrub with a heartbeat.

Needless to say, our visiting scientists are fascinated, and Dr. Terry Mason (Carver) makes the ill-fated decision to uproot the bush for study. When it appears to be dying, she doubles down on her girlish idiocy, injecting it with “Formula 447”. One suspects any of the preceding 446 would have been a better choice, for (curiously, exactly as in the last film I reviewed here, Life) this attempt at resuscitation sends the research subject off on a murderous rampage. Admittedly, in this case, it’s a rampage from which you could easily escape, at a slow amble. Tree stumps are not exactly noted for their cheetah-like gait.

However, what they may lack in pace, they appears to make up for in remarkable stealth, going by the way Tabanga is able to sneak up on his victims, without them noticing any tell-tale rustling. The women victims inevitably shriek loudly before fainting conveniently onto his limbs. The male targets don’t come off much better, being utter crap at self-defense against vegetation. The worst offender there is the tribesman who is literally incapable of hitting the broad side of a tree with his spear, from a distance I charitably estimate at no more than three feet.

The early going here actually makes some sense, in that the Flora Formerly Known As Kimo is taking revenge on those who killed him. But when those have been disposed of, it branches off (hohoho – look, you don’t know how hard I had to restrain myself to just the one tree pun in this review) into the staple of fifties movies: _____ needs women. The blank might be Mars, the Creature from the Black Lagoon or, as here, a re-animated tree-creature. Quite what he’s going to do with Dr. Mason remains vague. By this point, the local people have realized Tabanga cannot be killed with their feeble efforts, and beg the scientists to save them, American-style – in a hail of bullets. Because ‘Merica 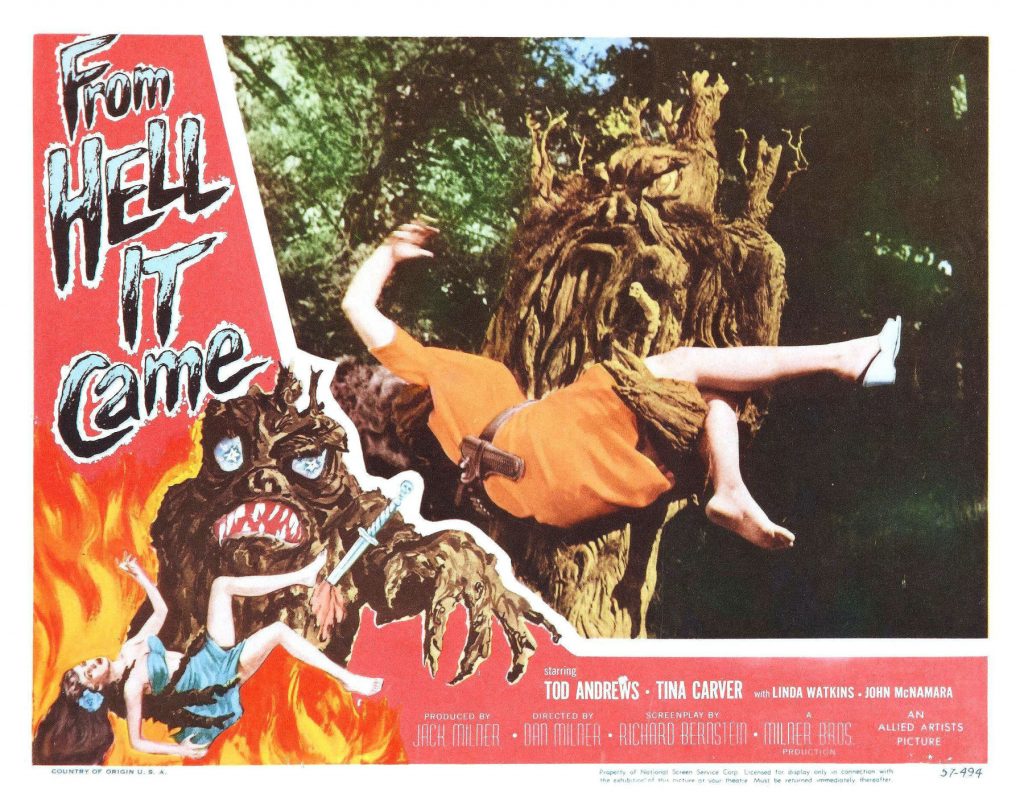 Yeah, this manages to be horribly patronizing to three separate groups: native tribesmen (“He’s afraid of losing his patients to modern medicine. He wants to keep them steeped in their centuries-old superstitions”), women (“Terry, will you stop being a doctor first and a woman second?”) and, most importantly of all, British people. For the scientists’ housekeeper, Mrs. Mae Kilgore, is played by Boston-born Linda Watkins, with an English accent which sounds like Dick Van Dyke channeling Crocodile Dundee. It’s easily the most offensive thing in this.

Although admittedly, I haven’t even got to the monster, which certainly ranks among the worst cinematic creatures of all time. Probably a little below the likes of The Giant Claw or my all-time fave, The Creeping Terror. But definitely deserving of warm applause, and a participation rosette. This was designed by Paul Blaisdell, who had a long career crafting B-movie creature including work on Invasion of the Saucer Men, Earth vs. the Spider and, coincidentally, Voodoo Wooman. I think he deserves credit for taking a concept that should have been strangled at birth and, rather than laughing hysterically and walking out, rolling up his sleeves to turn out something possessing a certain retro-cool.

At least, when it’s standing still. In motion? It’s about as threatening as you’d expect, i.e. not at all. It might have worked better in stop-motion, or if Kimo’s curse had resulted in general animation of foliage, in the style of Evil Dead, rather than reincarnating as a specific monster. There’s no shortage of possibilities. Indeed, at one point Dr. Mason proclaims, “I know about cannibalistic flowers, but this tree monster is utterly unbelievable.” Cannibalistic flowers? Is that blossoms that eat other blossoms? Or that eat people? Either way, I was left wishing someone had replied, “Ooh, tell me more!” Deadly Dahlia’s Revenge, maybe.

Once Tabanga begins its quest for vengeance, things perk up considerably, and there’s a fair amount of goofy fun to be had. Particular highlights include watching the locals trying to lure it into a pit, so they can hurl burning torches at it, and the way it interrupts a catfight between two “native” women. Quotes used advisedly, since one of them is played by Suzanne Ridgway, who hailed from the less-than exotic location of Los Angeles. Almost at the end of her career, she appeared in over 200 films – mostly uncredited – including three Best Picture Oscar winners (Around the World in Eighty Days. Gone With The Wind and The Best Years of Our Lives), as well as Citizen Kane and It’s a Wonderful Life.

Unfortunately, until the rampaging begins, the pacing is terrible. Little more than an hour long (68 minutes), we are almost 45 minutes in before Tabanga picks up its roots and walks. To that point, you’ve got to endure a whole bunch of pseudo-authentic jungle rituals, and a lot of painfully unconvincing romantic banter between Dr. Mason and the film’s romantic interest and implausible heroic lead, Dr. William Arnold (Andrews). This includes the immortal exchange:
“If you didn’t want me to kiss you, why did you kiss me back?”
“I don’t know. Maybe it’s my metabolism”
#HailScience