More than a slight Tales From the Crypt vibe about much of this, with evil people getting a twisted comeuppance for their deeds. The Crypt Keeper in this case is Montgomery Dark (Brown, under several pounds of aging make-up), the owner operator of the mortuary in Raven’s End. This is a small town apparently stuck in the eighties, though nothing much is made of that. There’s something a little “off” about him, and local kids are simultaneously fascinated and repelled by his establishment. Made of sterner stuff is Sam (Custer), a young woman who answers his “Help Wanted” sign. As part of the tour, he agrees to tell her stories about those he has previously served, and how they came to be his customers. 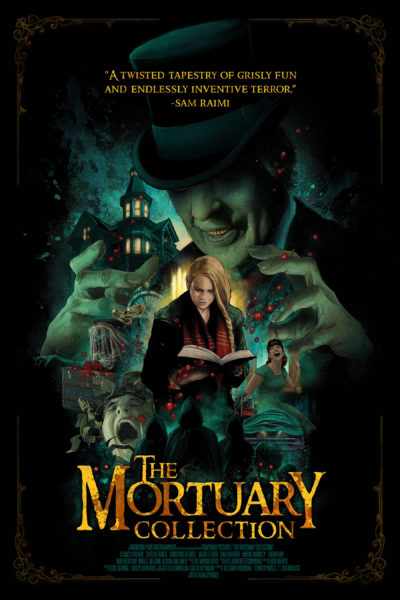 That’s where we get the four episodes that form the bulk of the film. The first is about a very occupied bathroom medicine cabinet. The second tells the story of a young man (Elordi) who learns the perils of not wearing protection on a one-night stand. Third up, is a man (Hardley) who is taking care of his catatonic wife, and comes to a decision to end her suffering. Naturally, things aren’t as easy as he’d like. Finally, Sam tells Montgomery a story, in regard to the corpse of a young child whose funeral had just taken place that afternoon. For Sam is not quite the innocent job-hunter she seems to be. Nor is Mr. Dark quite the innocent mortuary owner he seems to be.

Like all anthologies, the stories are a bit hit and miss, but at least there’s a consistency in style, which makes them feel like they are set in the same world. #1 and #3 were likely my favorites. The first is easily the shortest, yet it’s like a cinematic blow-dart, wasting almost no time in getting to its point. The third had a nice sense of escalating horror, with its “hero” repeatedly finding out that, yes, things actually can get considerably worse.  The second felt more like some kind of woke fable, which didn’t fit the supposed sixties setting; as mentioned above, none of the supposed period elements amount to a great deal. The “twist” in the final entry seemed a bit too easily guessed, and I speak as someone usually oblivious to such things.

I think my major complaint was a general sense of “safeness”. While it’s technically very nice, and there are a lot of effective, practical effects, it doesn’t feel like the sort of film which will exactly generate passion. If ever a film in which a television is used to crush a man’s head, or that includes pedo-cannibalism, could be said to be “bland”, this would be it. If you’re going to introduce those kinds of elements into your story, you need to full-force embrace the darkness. The light, comic-book tone adopted here feels ill at odds with the exploding penis. And that’s a sentence I did not expect to be writing today.