No prizes for guessing the inspiration behind this action-comedy, although fair warning: it definitely falls into “Korean knock-off” territory when set beside the Cruise behemoth. It starts Lee as Chinese intelligence officer Wong Iring, who is sent to Korea to intercept and cut off a shipment of weapons, under the fake identity of Yoo Dae-Hee. She doesn’t know that she has been set up to fail, giving the Chinese government plausible deniability as they want the guns to reach the target and destabilize their near-neighbour. Her original contact suffers an accident, and she accidentally believes moderately crap private detective Woo Su-han (Kim) is her liaison, while he thinks she is from Korean domestic intelligence. Together, they work their way up the chain towards the chief gun-runner Jeon Hoon (Oh), though become suspects for the bodies left in the wake of their investigation.

If this is all very slight, it can’t be denied that it does offer an acceptable level of entertainment. The two leads have good chemistry, and play off each other to good effect. The pacing is decent, without much in the way of dull patches, though there were a few elements in the script which did make me roll my eyes a bit. The most obvious of these is the reveal that Woo is a former Korean special ops solider, who was drummed out of the military after an operation went wrong. It’s lazy writing, designed as an excuse for the close-combat skills he’ll need in the final reel, and contradicts just about everything we learned about his indolent character to that point. 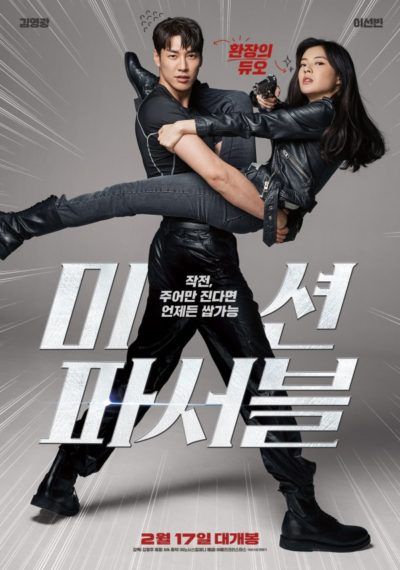 I was initially watching this, in the expectation of reviewing it over on Girls With Guns, but I was surprised (and a little disappointed) to discover that Wong/Yoo is very much a supporting character, especially in this area of proceedings. However, she does seem to be the smarter of the pair, making her a good foil for Woo. This isn’t a film apparently interested in challenging traditional Korean gender roles at all. We even get some moderately amusing homophobia, with her original contact’s being mistaken as a suicide attempt, after being captured on the kiss-cam with another agent, while meeting at a stadium.

That’s about the level on which this operates, or our heroes arriving too early for a tango class, and having to do yoga instead. In other words: do not expect much to engage the brain. That clearly is not the intent here: the targets here may be low-hanging fruit, yet it does hit most of them with an adequate degree of energy, and the execution is polished too. This was not a cheap production, and it shows in good production values across the board. As mindless light entertainment goes, you might as well watch something like this screwball spy caper, which has few pretensions above that. Though you’ll potentially find yourself hungry again, about 20 minutes after the end-credits roll.