Best described as a cross between Office Space and a zombie flick, this sees a worldwide pandemic of the ID-7 virus, known as “Red Eye” for one of its main symptoms. Rather than turning its victims a bit bitey, it basically disarms all their inhibitions. Infected people do exactly what they want, which usually involves sex, and especially, violence. The latest outbreak affects the headquarters of Towers and Smythe Consulting, which is ironic, since they were instrumental in having acquitted the first man to commit murder while under the virus’s influence. The building goes under 8-hour quarantine, until the antidote pumped in by the CDC takes effect: until then, however, anything goes. 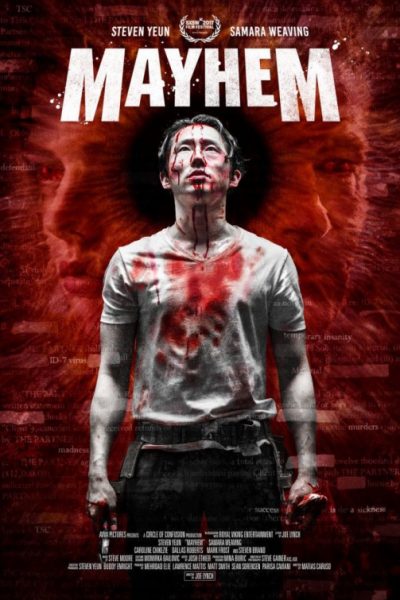 In particular, if provides Derek Cho (Yeun) with a chance for revenge. He was just fired after becoming the corporate fall guy for the incompetence of another employee, whom he has nicknamed ‘The Siren’ (Chikezie). Derek teams up with Melanie Cross (Weaving), whose mortgage is being foreclosed on due to the company’s recommendation, and begins working his way up the floors and the corporate ladder, towards company boss, John Towers (Brand). So, I guess you can throw in The Raid – or, if you prefer, Dredd – to the mix of influences on display here. However, to the credit of Lynch and screenwriter Matias Caruso, the combination ends up being acceptably more than just a grab-bag of familiar elements.

We should also praise Yeun and Weaving, for performances which remain relatable, even when engaging in acts of extreme violence. The latter, in particular, wields a mean power-tool, in a way which makes me want to start up a Girls With NailGuns site, and it’s nice to see Yeun outside the world of The Walking Dead. However, it can’t quite escape the shadow of The Belko Experiment, which covered very similar territory. The main difference is here, the moral get-out clause which is “the virus made me do it”. This definitely dulls the psychological edge resulting from the carnage which follows compared to Belko, where the perpetrators had all their mental faculties, even if their choices were greatly limited.

It’s hard to escape the obvious stabs at corporate satire, and these aren’t especially successful. It likely works better when Derek is annoyed by petty grievances to which everyone can relate, such as the disappearance of his coffee-cup, rather than trying to make big statements about raindrops and floods, as it does on multiple occasions. The film does take a bit too long to get to the raw meat promised by its title, bogging down somewhat in the world of office politics, and the rules of how the virus operates are more what you’d call “guidelines” than actual rules. Derek and Melanie are far too calculating as they take advantage of the situation, compared to the feral creatures of his colleagues.

However, there’s no denying the glee with which Lynch and his cast go for it thereafter, when the metaphorical backstabbing turns into actual backstabbing – not to mention frontstabbing, sidestabbing and whacking with blunt objects. That’s what we’re here for, and you’re be hard-pushed to deny the film delivers.