I’ve got a theory that most obscure movies have been forgotten for a reason, and it’s usually that they’re not very good. Witness this Spanish candidate: shortly to receive a Blu-Ray release after decades where it was only available as a VHS or rip thereof. And having seen it… I kinda wonder, why bother? It’s marginally okay, but there’s hardly anything that sticks in the memory, above a thousand other similar B-movies of the eighties. About the best thing which can be said for it, is the abrupt shift in tone over the course of proceedings. 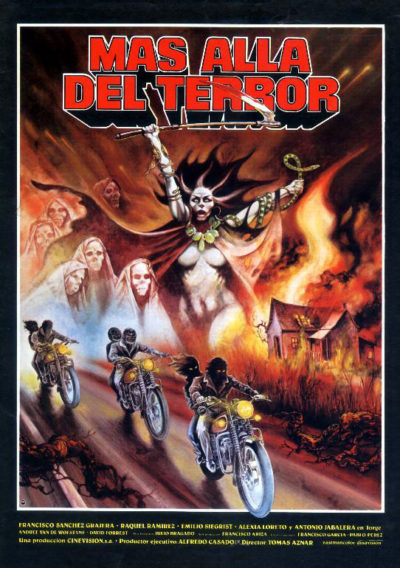 It begins, almost like a Spanish take on A Clockwork Orange, being the adventures of a gang of young thugs, on a drug-fuelled rampage around their town. Specifically, it opens with Lola (Ramírez), whose amorous pickpocketing ends up resulting in murder. She then teams up with the rest of her crew, including her brother Nico (Siegrist) and Chema (Grajera). Their robbery of a diner turns into a bloodbath, from which they escape with two hostages, wealthy couple Jorge (Jabalera) and Linda (Alexía Loreto). A car-accident forces them onto foot, and they stumble across a house occupied by an old woman. Still seeking a bit more of the old ultra-violence, they kill the family dog, and end up burning the place down. With her and her grandson (we presume) still in it.

Which is where things go odd. For it turns out Granny was a high-ranking Satanist, and calls down the powers of hell. [Why she waited until her dying breath to do this, is quietly ignored] So, their new getaway car develops a mind of their own, stranding them at a remote, partly decrepit church and catacombs. The weirdness escalates, the car bursting into flames with one of them inside, along with the appearance of the supposedly-dead small boy and canine. However, this is sadly where the film largely grinds to a halt. It’s clear none of them are going to get out alive, and the only question is how they’ll meet their fate. The answer is, not in any particularly exciting way, and this doesn’t stop them from doing quite a lot of talking. I must say, their language is… quite colourful, including a number of phrases you won’t find in your Duolingo course.

The poster uses artwork from the cover of 1971’s Vampirella #11 comic, and I can’t say I’m surprised. Fitting in with that low-rent aesthetic, one of the writers was the infamous J.P. Simon, who would go on to direct Slugs and the truly dreadful Cthulhu Mansion. But here, even he used a pseudonym, Alfredo Casado, which the cynic in me mutters should tell you something. This isn’t Mansion bad, for sure. Yet after doing the heavy lifting and setting up a scenario and location which are intriguing, the film fumbles things badly, delivering a resolution in about the least interesting ways imaginable.