It doesn’t get much more obvious than a horror anthology set on Halloween. Yet, while never entirely escaping the flaws familiar to its structure, this has a strong visual style that helps glue things together, and the good likely outweighs the bad. The linking theme is Psychotronic FM’s annual Hallloween show, where host Chilly Billy (Taylor) and his sidekick Paul (Galligan) tell stories over the air to their audience in New Salem. However, the town remains a hot-spot for weirdness, as is shown by events over the course of the night. It all ends up coming together in a clash of the present and past, which strikes too close for comfort to our hosts. 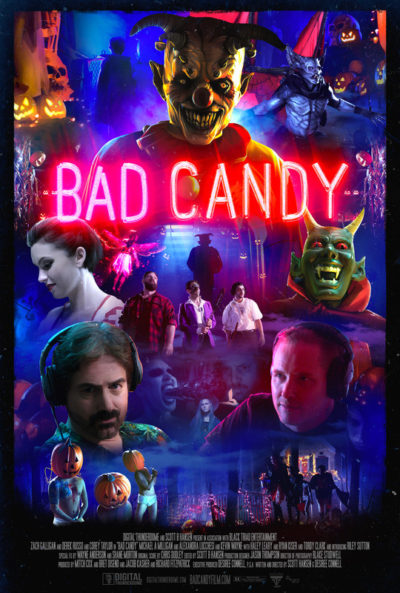 Early on, it seems almost to be heading into It territory: a gang of outsider kids, one living in an abusive home, being menaced by a very creepy clown. This eventually becomes just the first of the stories, in which the abuse victim’s drawings come to life to protect her [there’s a moment vaguely reminiscent of Terry Jones’s Lady Cottington’s Pressed Fairy Book, which may be the most obscure reference I have yet dropped on this site!] Yet not all the remaining stories are quite so cuddly and warm-hearted. Probably the creepiest features a morgue attendant, apparently dressed for Halloween as “slutty Milla Jovovich”, who gets more than a bit close to her subjects. I’m not sure I’ve seen a lengthier depiction of necrophilia since the days of Nekromantik.

Like all anthologies, not everything works equally well. There’s one about a faded drug-dealer, making his way through the Halloween party scene, which never goes anywhere much, and takes too long not to get there. To be honest, the finale, where Chilly Billy finds the past isn’t something to be messed with, was a little disappointing, though I did like the concept of a building both being on fire and not at the same time [Schrodinger’s House?]. I probably preferred the penultimate story, about the “Halloween Vigilantes”, who wreak revenge on all those who don’t treat the holiday with the respect it deserves, whether by putting razor blades in candy, or simply not celebrating it.

This does a particularly good job of achieving the Creepshow vibe for which it seems to be aiming, and also manages to tie together a lot of the threads, such as explaining the creepy clown. A bit of horror fatigue may have been setting in after that point as well: it feels a bit longer than its hundred minutes, and that may have played into my relative disinterest for the final segment. However, even during the lesser sections, the film still looks really nice, with colours that pop off the screen, and this enhances the whole Halloween spirit. To put it in trick or treating terms, while not devoid of Milk Duds and candy corn, there are more Twix’s and Kit-Kats  in this bag of rewards.