An unnamed man (Stout) runs a facility called “The Hole”, in which prostitutes are broken, through a mix of drugs, violence and psychological torture. The latest “patients” to be sent for treatment are tough bitch Mariah (Jenna) and the slightly more mature, in both senses of the word, Carla (Nuss). They strike up an uneasy relationship, at least partly united in a hatred for their captor. But when Kimmie (Rhodes) a very young girl – as in, nine years old – becomes the hole’s newest prisoner, Carla, and to a lesser degree Mariah, decide that enough is enough. 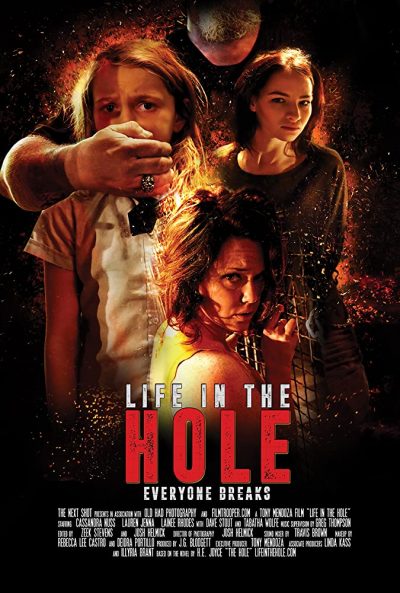 I honestly can’t fault the performances of the two leads, who manage to take very spiky characters and give them depth, as well as making them considerably more sympathetic than I expected. However, the script is flat-out terrible. The first hour or so, is no more than a collection of low-life and sex workers cliches e.g. biker-looking dude and daddy issues, intercut with watching someone go on a bad drug trip. That is as entertaining as it always is. By which I mean: not at all. It might have helped had the acting direction been apparently more in these scenes than, “Pull a face! Yeah, that’s it! Pull another one!”

The result, for most of the first half, is to leave the viewer wondering, frankly, why they are watching this, as the lack of point feels glaring. It doesn’t help there’s an uncomfortably leering and grubby approach to the sexual violence as well, so you may want to have a shower on stand-by. The arrival of Kimmie provides much-needed narrative impetus to proceedings. It then becomes a battle of wills and wits between the two older woman and their captor. The former know exactly what is in store for Kimmie, and it becomes clear that they’re going to have to become just as savage as the latter, if they want to rescue her.

Yet it’s not as straightforward as that. The further this goes, the weirder things get. It’s not at all clear whether Kimmie actually exists. Certainly, her behaviour diverges increasingly from what you’d expect out of a nine-year-old. Going by lines like Kimmie telling Carla, “You know who I am,” you could make a case she’s just a figment of Carla’s imagination, split off as the result of the ongoing trauma. Yet this is not Fight Club, both Mariah and the guard interacting with Kimmie as well.

You will be entirely on your own here though. Do not expect the film to give you any significant help or explanation, another way in which the script proves less than satisfactory. I’m not averse to films with ambiguity, or where the viewer has to put in some work. However, there’s a point where the film-makers have to do some fucking work as well, and this falls well short of the required standard. By the end, the only question of note is whether you were less enlightened or entertained.