I guess you could call this a “Spätzle Western” of sorts. A German production, but one shot in Spain, it adopts many of its elements, not least the music, from the more famous Spaghetti Westerns produced South of the Alps. It seems these were rather popular in Germany, and there were some successful entries produced there, before Italy took over the genre, based on the works of Karl May. Indeed, the highest-grossing film in Germany of 1963 was one of these home-made Westerns: Winnetou, a.k.a. Apache Gold. But it’s safe to say this troubled the box-office little, if at all. 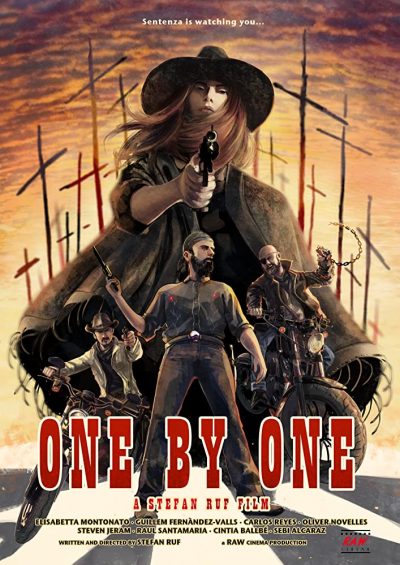 Despite a 70-minute running-time, it still feels too long, without enough meat on its bones to satisfy even the smallest of circling vultures. It begins with Sentenza (Montonato) and her boyfriend out in the desert, where he reveals he has just set them up by pulling a fast one on a biker gang. The drugs sold to their leader, Cuchillo (Fernàndez-Valls), were not as pure as the biker believed. Barely are the words out of his mouth, when the purchaser returns with his two sidekicks, doing the drug-dealer equivalent of asking to speak to the manager. Which in this case, consists of Sentenza being raped and left for dead, while her other half is turned into a flaming shish-kebab.

Based on the cover, you would be expecting Sentenza to take revenge – it’s the SpagWes way, after all! And, she does… eventually… However, that only occupies about the last ten minutes, and isn’t the focus of the rest of the film. I’m not really sure what is, to be honest. We seem instead to follow Cuchillo and his pair of henchmen, and they do little save for brutalizing another couple [does he have something against those in love?]. Given their psycho credentials were already perfectly well established, this entire sequence seems to serve little or no purpose. Though I guess one bit of particular savagery does demonstrate the appropriateness of Cuchillo’s name – it’s Spanish for knife.

Eventually, Sentenza shows up again, now sporting (for no readily apparent reason) a poncho and a Stetson hat. You’d be forgiven for having forgotten all about her by that point, she has been absent for so long. This robs her vengeance, when it finally happens, of almost all impact. Matters are not helped by a soundtrack which, while not inappropriate for the genre, appears to have been glued crudely on top of the footage. On occasion, it simply cuts out in the middle of a musical phrase, or even a single note.

About the only point of note is a moment of striking imagery (shown, top), depicting a landscape littered with a huge number of makeshift crosses. It’s good enough to be something you’d expect to see in the works of Leone or Corbucci. In the context of this largely artless production, the shot seems to have been spliced in from a completely different film.