VR has been a popular topic for SF film-makers for at least a quarter-century, since The Lawnmower Man. But there have been far more hits than gimmicky misses in the sub-genre. The ones which work, such as eXistenZ, are generally those less concerned about reproducing the shiny virtual world (even now, you still can’t improve on the real thing for an all-encompassing experience), and expend more of their efforts into putting together a decent story-line, rather than inventing it as an afterthought. I’m looking for just a bit more than an obvious twist, after 80 minutes of running around and bickering while wearing a pair of cutting-edge glasses. Which is what we get here, in case I wasn’t clear. 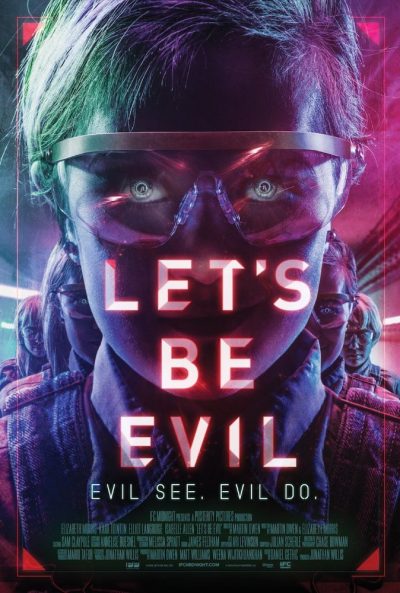 Things the movies teach us, #383: Never accept an implausibly well-paid offer from a mysterious tech company, especially when they seem particularly concerned about confidentiality. It never ends well. Jenny (Morris) is apparently oblivious to Rule #383, and gleefully whizzes off to her new position as one of three supervisors on an “educational” project, involving oversight of a group of children. They are the guinea-pigs for a high-intensity VR education program, buried deep in an underground bunker, and it’s not long before Jenny is increasingly concerned about the well-being of these Village of the Damned refugees. And for good reason, as it eventually becomes apparent that cutting kids off from reality and force-feeding them cyberspace leads to alienation and unleashes their inner psychos.

This is the particular kind of “cutting edge technology” film which is not going to date well: in a decade or so, we’ll likely look back at it and laugh mockingly. Which might be okay, if it were any good at the present time. It isn’t. Most obviously, Jenny and her two colleagues, Tiggs (Tointon) and Darby (Langridge), are the kind of young people I yell at to get off my damn lawn, and the VR headsets through which virtually (hohoho) the entire film is experienced, is more a pointless gimmick than providing any enhancement of the cinematic experience. It rapidly turns into a Google Glass version of The Blair Witch Project, with Jenny and pals being chased by largely-unseen threats in POV, while whimpering loudly.

There are so many plot-holes here, I don’t know where to start. Not least that the purpose here is never even somewhat clear. Is this a legitimate education project? Or was the aim all along to drive the subjects off the edge? Either way, there’s absolutely no way, given the massive investment here, management would ever be left in the hands of a GLaDOS knock-off and three twenty-somethings, who would be hard pushed to get a call back for a Tier 1 Technical Support position where the main job requirement was opposable thumbs. Maybe the implication is that the watchers are being watched; on arrival, Jenny is initially met with complete denials the project even exists. Except, it’s never mentioned again, and even at the end, the viewer is left wondering what the point was.