The bar for “killer croc” movies was set particularly high by 1999’s Lake Placid, which featured a bevy of brilliant characters, and wonderfully acidic lines which I still quote to this day, such as, “Well, they conceal information like that in books.” Any movie with a crocodilian antagonist is inevitably going to be compared to it (save for those occupying the campy end of the spectrum, where the go-to standard is Mega Python vs. Gatoroid). Because what Placid did, was achieve precisely the correct pitch – acknowledging the silliness of the basic concept, while its characters still took things seriously. This tilts too much toward the latter, even as the story increasingly heads off the deep end. It apparently wants to be a cross between Jaws and Scream, explicitly referencing both movies. Except, Berry is neither Steven Spielberg, nor Wes Craven. 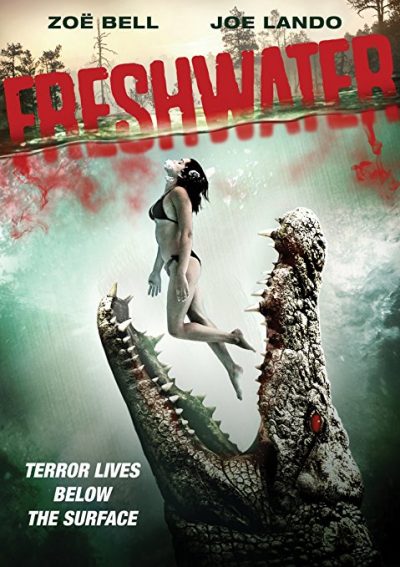 In a small town in the South, people are going missing. Alligator expert Brenda Grey (Bell) arrives to investigate, much to the chagrin of local lawman, Sheriff Jones (Lando), who has recently taken over the post, in search of a quiet life. Meanwhile, a bunch of photogenic 20-something have taken over a house… on an island… in the reptile’s lake… out of cell-phone range… for a party. Sure you can figure out how things go from there. Or perhaps not, since the film takes a turn in the second half, where it turns out the ‘gator may not be the biggest threat to local life-expectancy.

The Bell and Lando angle isn’t actually the problem here. Bell sports a fetching accent, which helps avoid thinking of her as some kind of Kiwi Dundee, and Lando has the kind of veteran presence which will always benefit a film like this. If the script had stuck entirely with their investigation, and the tension as they pull in two different directions, it would have stood a significantly better chance. It’s the utter blandness of the victims, particularly the party goers, which hole this particular boat below the waterline. Perhaps they’re the kind of characters that are designed to appeal to people “like” them: I found them, at best, thoroughly forgettable, and at worst, was annoyed enough to be actively cheering on their demise, be that reptilian or human-induced. Every scene in which they appear is an active waste of oxygen.

Then, when we eventually discover the truth about what’s going on, you’ll be forgiven for, at the very least, lifting a sardonic eyebrow. Muttering “Really?” would be fine, and I wouldn’t argue if there happened to be derisive snorting involved. The special effects are no great shakes either, though that’s never been something which has stopped me from enjoying this genre. I did laugh out loud at one sequence where the creature manages to sneak up behind someone sitting on a pier. Guess it must have been the rare ninja alligator, or perhaps it was just wearing carpet slippers. Unfortunately, I don’t think this was particularly intentional, and despite Bell’s best efforts – as this likely proves, we’d watch her in anything – the film makes a rapid descent toward the bottom of the bargain-basement barrel.