Alex (Alexandrou) wakes up on a patch of wasteland in Bangkok, unable to remember anything. He can only watch, as a man is caught and executed in front of him, by a group of armed guards – men whose attention quickly turns to him. Wisely, Alex legs it. So begins a series of diverging “retakes” of events, each beginning from the same point – but with Alex’s memories of previous runs, allowing him gradually to come closer to the truth about who he is, and why he’s the subject of this manhunt. Of course, being a martial-arts and parkour expert doesn’t hurt his survival chances either… 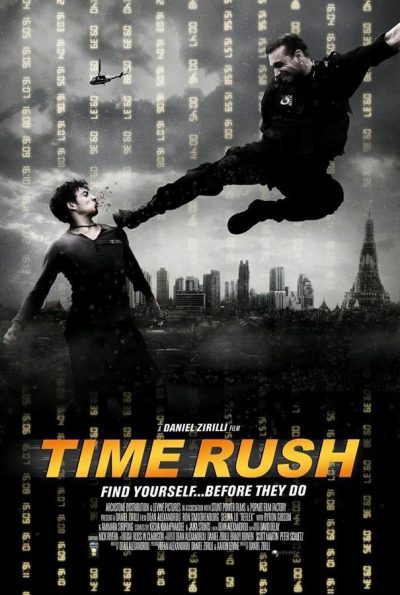 If you thought, “Memento was okay, but it really needed some more kung-fu,” then this is probably for you. There’s more than an echo of Run Lola Run as well  (rarely a bad thing), in the repeatedly resetting timeline – of course, it also allows Zirilli to re-cycle some footage, keeping costs down. Though technically, this is not “time travel”; we eventually find out Alex was involved in the trial of a drug that allows the participant to view potential future outcomes, like a chess grandmaster seeing several moves ahead. That enhancement doesn’t do his fighting expertise any harm at all, obviously.

Let’s be clear: this is a gimmick movie, and falls far short of either Momento or Lola in terms of heart and emotion. Alex is less a character, than a moderately well-rendered video-game avatar. Much the same goes for his girlfriend, Jane (Lo), the man heading the pursuers (Smoorenburg) or Brink (Gibson), the guy who knows what’s going on – and naturally doesn’t bother to explain it all, until necessary to the plot. Matters are not enhanced by dubbing which turns Lo into a refugee from Basildon, and hampers the performances of just about everyone else.

But, oh boy… When it’s in motion – and that’s a majority of the time – this is an unexpected treat. The hero doesn’t so much move, as flow around the urban landscape of Bangkok, going from one well-choreographed fight sequence to the next, against a variety of local and foreign minions, in a range of interesting locations. There’s one moment where he does a… I’m sure there’s a better technical term, but I’ll go with “corkscrew side-jump kind of thing”, off the side of a building, and sticks the landing. It’s like something you might have seen Yuen Biao does in his heyday.

The contrast between Alexandrou, all speed and flexibility, and Smoorenburg’s force and power, makes for some effective combat, and it helps that Zirilli knows what he’s doing with the camera in regard to these sequences. Or, more importantly, what he’s not doing with the camera: not waving it around like an epileptic baboon, in an misbegotten effort to create “energy”. Instead, the results let us appreciate the skills of the performers, and it’s those which elevate this into a pleasant surprise, well above the average for low-budget action flicks in terms of entertainment.