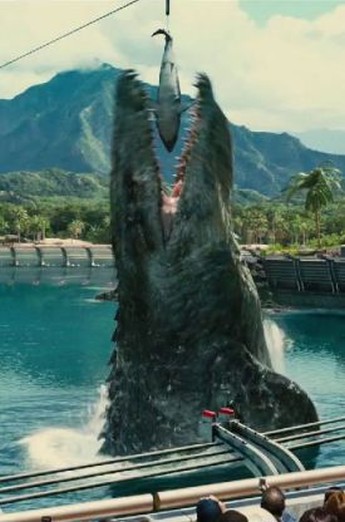 I re-viewed Jurassic Park a couple of years ago, and it had stood the test of time reasonably; I don’t get the feeling that if I watch this sequel in 2033, it will survive as well. At the time, the original offered the wonder of seeing dinosaurs on the big screen, in a way we hadn’t experienced before. Even with that gone, in a slew of TV series, etc. that have brought the fossils back to life, it remained a well-crafted movie, with interesting characters and no shortage of tension. This, however? Meh. The two kid characters on whom much of the early going focuses are more annoying than anything, and serve little function, except to be rescued. Howard’s park executive isn’t a great deal better; the only one who comes out of this feeling like a well-rounded individual with, y’know, motivation and a history, rather than being a series of hooks for plot elements, is Pratt’s raptor trainer.

He’s called in to consult on security for the latest genetically-engineered attraction, which is part T-Rex, part tree-frog, and apparently smarter than most of the corporate employees. Cue a rampage, followed by much running and screaming, before a finale which just needs Ken Watanabe to turn up and proclaim dramatically, “Let them fight!”. Certainly, the spectacle is here, though we’ve now seen this kind of giant battle done often enough, and Trevorrow – a director I’d not heard of before, and with no experience in this kind of thing – brings little or nothing new to the table. Technically, the main area of improvement is a better sense the humans and dinosaurs are inhabiting the same world, rather than one being pasted onto the other.

The main new monster, the aquatic mososaur, also kicks ass, even though the version here appears to have used more steroids than the East German Olympic team [in reality, it was no bigger than the largest sharks we have nowadays] It’s hard to find many other aspects in which this surpasses, or even matches, its predecessor, though Pratt is the equal of Sam Neill, albeit in a different way, with less gravitas and greater likeability. [I am, however, biased, having interviewed him four years ago, when nobody much knew who he was, outside Parks & Recreation fans]. I’ve little doubt its massive success will open the doors to a franchise, as well as innumberable knock-offs. I can’t say I am enthralled by the prospect.