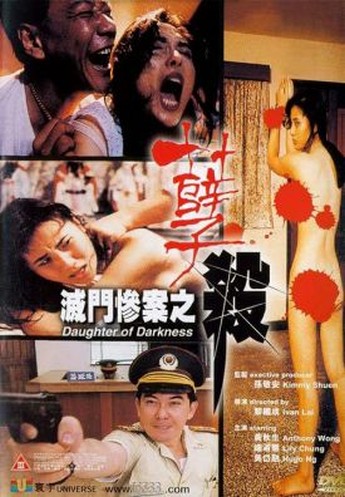 This is one of the most utterly berserk and uneven in tone movies I’ve ever seen. It starts off as broad comedy, with mainland China police officer Lui (Wong) berating suspects and behaving like a dick, even to his new, earnestly Communist assistant. This blunt political satire evaporates when the attractive but clearly devastated Mak Wei-Fong (Chung) shows up, mumbling that her entire family have been slaughtered. We then enter Inspector Closeau territory, as Lui bumbles his way through the investigation for a bit. But things take a turn for the darker, as it turns out Mak was in a relationship with one of Lui’s colleagues, and the evidence in this case is increasingly implicating the couple. The cop confesses the killings were all his doing, and begs Lui to let Mak go. But when she hears he has claimed responsibility, Mak reveals the even more repellent truth, in an extended flashback which occupies much of the movie’s second half.

And that’s where the shit hits the fan, for it turns out that Mak’s home-life was a hell of an entirely different kind, with a father (may be step-father, it’s kinda vague on the details!) who starts at abuse, progresses to molestation, then heads for full-on rape. He then takes pictures of his mostly-naked daughter, and uses these to blackmail her into returning to the house. And it’s not for a party. Though there is, bizarrely, birthday cake involved. It’s pretty rough to watch and considering where this one began, it’s a hell of a change in tone. It’s perhaps a shame Wong wasn’t better used: while he eventually makes a fairly repellent character somewhat sympathetic, the kind of comic mugging he is required to do here seems a waste of his talents. Ho, playing the father, is the sleaze-master here, and is solid if not particularly memorable. Worth watching once for those of an edgy disposition – no Anthony Wong movie is ever worthless – yet the jarring shift from comedy to sleaze leaves it feeling like a Hong Kong remake of the little-seen Carry on Child Molesting.