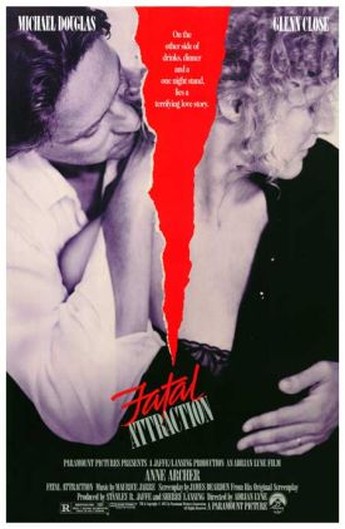 This iconic eighties film has not stood the test of time well, in comparison to the not-dissimilar Basic Instinct from a few years later. The problems are two-fold. Firstly, why would successful, happily married Dan Gallagher (Douglas) cheat to begin with? The script miserably fails to establish any credible justification for this. Yet, barely have wife Beth (Archer) and moppet Ellen (Latzen) headed out of town on a house-hunting expedition, and he’s leaping into bed – not to mention the elevator and, literally, the kitchen sink – with publishing company editor, Alex Forrest (Close). And there’s the second part of the problem. Right from the get-go, it’s clear she’s a sandwich short of a picnic, and with frizzy blonde hair and angular features, she’s hardly the type of beauty that would make any man overlook other flaws. Contrast Instinct, where Douglas played a single man with a history of self-destructive behaviour, and Sharon Stone pretty much left a slug-trail everywhere she walked. Their hooking-up made perfect sense. Here, it left me snorting derisively, when it should have been picking at the “what if?” weakness which every married man possesses.

Not to say it doesn’t have its pleasures, particularly when the gloves come off, after Dan realizes just what a packet of fruit loops he has opened. The further this descends into the gutter of lurid melodrama, the better it becomes, probably peaking with the infamous “bunny boiling”. For this is a film that needs to wallow in its own shallowness and embrace the rabidly anti-feminist message being promoted. I’d be hard-pushed to call any of the performances “good”, when you put them beside other candidates from the filmographies of both Douglas and Close; this is hardly Dangerous Liaisons. Quite how this became quite so lauded, given its no more than a tarted-up potboiler, escapes me. Best Director Oscar nominee? Really? Best Picture? Really? Damn, 1987 must have been a slow year. But let it be a teaching moment for all of us married men. Cheat on your wives, and you’ll inevitably be stalked by a mentally-impaired obsessive. Keeping it in your pants is probably for the best.