Is it wrong of me to be somewhat disappointed by this? Oh, it’s still a solid enough piece of action. But it lacks the elegant simplicity of the original, and what is added – in terms of an entire society of assassins – is not enough to make up for what is missing and/or repeated. As I remarked in my review of the original, “This is a really good adaptation of a video game, albeit one which doesn’t actually exist.” However, there’s only so long you can play the same game before it starts to become stale. 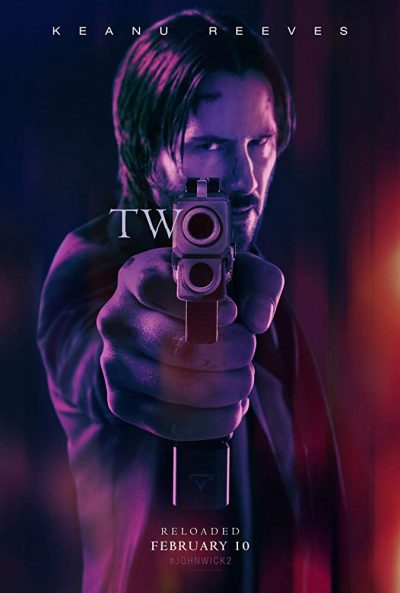 This begins almost immediately after the events of its predecessor. John (Reeves) has an old debt called in by Italian crime boss Santino D’Antonio (Scamarcio), and is compelled to accept the job of killing Santino’s sister. Though John honours the contract, his employer opts to put a $7 million contract out on Wick, to tidy up the loose end he represents. BIG mistake. You might as well have killed John’s puppy. With a host of fellow assassins on his tail, he seeks help from the Bowery King (Fishburne) to take D’Antonio out. Though doing so, may make Wick more enemies than even a 122-minute sequel can handle.

While mild, my disappointment may be related to the innate limitations of the gun-fu which the film showcases. Compare and contrast, say, Atomic Blonde, from the uncredited co-director of both films, David Leitch [a result of the silly director’s guild rule about not allowing two people to get that credit]. To me, Blonde was superior, perhaps because I find martial arts inherently more cinematic and interesting than firing guns. There’s just more variety possible, than when you are dealing, in its lowest incarnation, with the very simple task of pulling a trigger.

That said, Leitch and Stahelski do a solid job, squeezing every possible ounce of entertainment value out of the act. You can imagine the brainstorming production meetings around a large whiteboard, gradually being covered with suggestions of interesting ways in which people can be shot dead. It’s certainly a delight to see another action film which doesn’t pull its punches, fully meriting its mature viewers rating, mostly achieved through copious blood splatter. The glimpses into the assassins’ world are intriguing – yet also frustrating, for their incompleteness.

And that’s another issue. This doesn’t end, so much as set up the third installment, and so isn’t as satisfying as a standalone entity. It doesn’t help that Santino is an underwhelming, watered-down villain in comparison to Viggo Tarasov in chapter one. Somebody like Wick needs a protagonist who can be his equal: though we see some interesting minions, played by Common and Ruby Rose, they never pose much of a credible threat. Much like Keanu’s classic action film, The Matrix, there’s a definite case of “second movie syndrome” in the sequel, even if this doesn’t sink as low as the Zion rave. While still a cut above most action films, dare I suggest it’s a franchise which might be over-rated?