Today in, What will Michael Madsen do for Money? Here, it’s playing Dean, the owner of the Rapture casino in Vegas, famed in particular for its dolly-bird dealers in the ‘Sin Pit’. When one of those dealers, Kora (Farrell) has her son fall ill with leukemia, Dean won’t even go to bat for her with the insurance company. Kora and her colleagues plan to make and sell a racy calendar to raise funds instead, but Dean shoots that idea down too. No longer feeling any loyalty, despite the good will of his minion Carter (Howell), the dealers opt to use their inside knowledge of the casino’s practices to steal from the house, the money necessary for the treatment of Kora’s son. 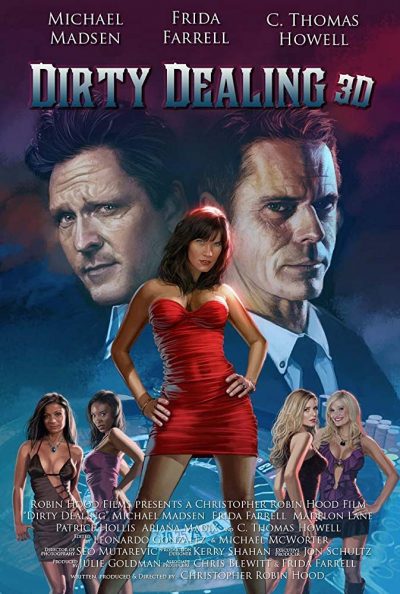 This was, apparently, originally made in 3D, for no particular reason I can discern, because it doesn’t appear to take advantage of that format. The closest it might come is the gratuitous skin, which is all but entirely contained in the “shooting the calendar” montage in the middle. It seems to have strayed in from an entirely different flick. There’s no denying, the women involved are certainly attractive.  However, the story occupies a strange, uncertain land between providing not enough information, and giving too much. I’m not certain of the details of most of the scams executed, except for the bit involving a certain slot on the roulette wheel being made “sticky”. While the fact the perps have help from the floor supervisor makes things easier, I’m still not convinced such a widely-known secret could actually be carried out successfully.

All questions of plausibility aside, this is low-tier entertainment, which just about skates by. Madsen plays the role of an abrasive dick effectively enough, though if you’re not seeing Mr. Blonde the casino owner, you’re not trying had enough. Howell actually does well, making Carter a likable foil to his boss, and is also involved in the twist ending – which, I will confess, I did not see coming. The issues are more on the female side, where you have a series of interchangeable Barbie dolls, without much in the way of distinguishing features. [You can probably tell, from the image at the top] Rather than going for quantity over quality, they should have cut it down to a couple of characters and given them some depth.

I was quite surprised to discover that this was not an Asylum movie. It feels, in many ways, like it’s a low-budget attempt to make a mockbuster of Ocean’s 8, from the stock footage of Vegas (in which the characters never appear) through to the presence of Madsen and Howell, as reasonably-priced “names” who can be sold, larger than strictly accurate, on the cover. Hood, whose name certainly feels like it’s a pseudonym for a porn director, proves competent enough, yet doesn’t do anything to elevate the unremarkable material. The result is the very definition of a forgettable, straight-to-Amazon-Prime feature, which will be erased from your memory as soon as the end credits roll.