For some reason, I keep thinking the title of this is It Waits, which is actually a completely different horror film from a decade or so ago. I found myself on the IMDb page for the wrong movie, and thought “3.7? I thought it was a lot more critically-lauded than that,” before discovering my error and showing myself out. The funny thing is, half the reviews for It Waits are a perfect mirror of what I thought about It Follows. For example: “You will wait and wait for something horrific to happen. Then there will be some eye-candy, then you will twiddle your thumbs, mumble a ‘ho-hum’ and then a good scene happens. The good scenes are like seeing a pretty girl at a librarian convention, few and far between.” Because It Follows has to be the most over-rated horror film since… Oh, I dunno. The Babadook? Tucker & Dale vs. Evil? The Shining? 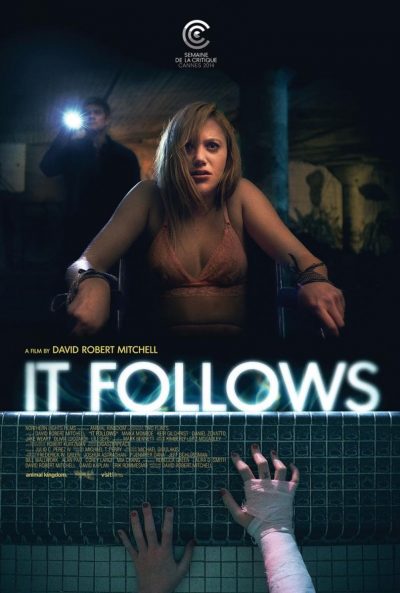 It does have an interesting hook. There is a creature which, once it latches onto you as a target will not stop following you, albeit at a walking pace. It is absolutely relentless in its pursuit. You cannot kill it. You cannot reason with it. [This idea, incidentally, appears lifted wholesale from a 1953 SF short story by Arthur Porges, called The Ruum] It can shape-shift to appear like anyone. Nobody can see it, except the victim. And the only way to get rid of it, is to have sex with someone; they then become the target. So what you have is Night of the Demon with a twist, and it’s both a showcase for one of the central themes of horror movies – have sex and die – and runs contrary to it, because having sex is also the only way to survive.

Yes, there’s potential in this fun concept, and you’re likely already figuring out ways you could avoid the curse. Five minutes of thought, and you’ll be able to come up with a decent list, probably headed with “Hooker.” But I guarantee you, the victims in this film don’t use any of them, for a dumber bunch of stumps you would be hard pushed to find. This is odd, and immensely irritating, because it’s also the kind of film where the makers appear to be yelling continuously, “Look at us! Aren’t we smart?” Barely have things begun and we’ve got a Dostoyevsky “joke”, and it’s also clear they are trying to make a Very Important Statement about… Death? No: AIDS? Maybe the loss of adolescence? “Sexual dread”?

Which is a problem. Because when you are in the business of making Very Important Statements, it should generally be kinda clear what the fuck you are talking about. Leaving it up to the audience to decide is not clever, it’s lazy and half-assed. Equally sloppy is the sense of period, with the film incorporating elements from the fifties all the way to the present day. According to the director, this was supposedly intended to create a dreamlike atmosphere, unconnected to any particular era. It fails, miserably, because you find yourself distracted by this obvious showboating. One second you’re thinking, “Ooh, where can I get a sea-shell shaped Kindle?,” the next you’re wondering in what universe teenagers would go to a screening of a Cary Grant movie with a live organist, without having to be roofied there.

It’s a shame, since when it sticks to its basic concept – and making allowance for the stupidity of everyone involved – it can be quite effective. This likely reaches its peak when the group are holed up on a beach, and the creature is slowly advancing behind its target, Jay (Monroe), who is oblivious to its approach. The sequence that follows, with it attacking people who largely can’t see the culprit, is deliciously unsettling, not least when Jay shoots it in the head – and it gets up again. How do you try to stop something like that? [The answer, incidentally, is by throwing a typewriter into a swimming-pool. Insert copious eye-rolling here, and even the director said, “It’s the stupidest plan ever.”] 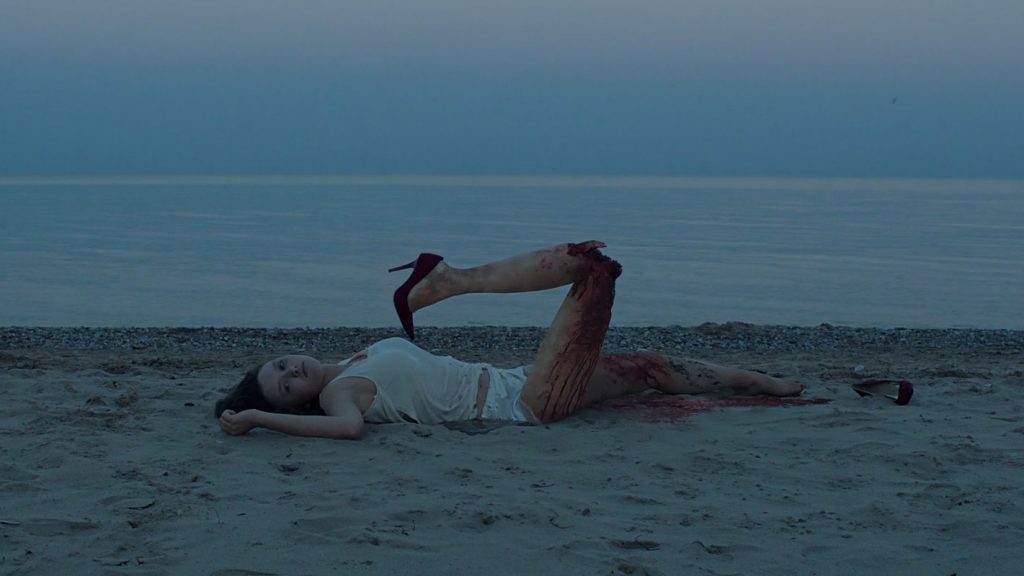 Mitchell has a great visual eye, which is apparent right from the opening shot, where the camera sits in the middle of a suburban street, as a series of unsettling events unfold around it. The soundtrack is effective too, and seems to have been an influence on Stranger Things, with its electronic collection of bleeps – unlike the rest of the film, this is rooted solidly in the eighties. But for every step forward, the film takes two back, such as the scene where the creature simply stands on the roof of the house, and watches as its target drives away. Creepy, certainly – but it makes no sense, and is in defiance of the film’s own internal logic, which repeatedly stresses the relentless nature of the adversary. It isn’t supposed to take breaks. Yet the very first time we see it, when Jay and her then-boyfriend go to the movies, it’s apparently just standing at the back, apparently waiting for its mate to return from the concession stand.

Again, it feels as if the makers used “dreamlike ambiance” as a Get Out of Jail Free card, an excuse to offer up careless and casual work. And don’t even get me started on the ending, which is as half-assed as everything else, offering absolutely no satisfactory sense of conclusion. But trust me, I could easily go on complaining, such as about the remarkable way everyone in an R-rated movie bonks away with their clothes glued on. Really, for a film with sex at its absolute core, this is remarkably prudish. The ambiance is also no excuse for the wafer-thin characters offered; outside of the heroine, I can’t even remember anyone’s name. It’s been a long time since I’ve sat through a film with such an obvious gulf between concept and execution: let’s face it, when even Quentin Tarantino is offering suggestions to fix your movie, you’ve got serious problems.