I briefly agonized over whether or not to apply the “zombiez” tag to this, because it’s a zombie movie in much the same way 28 Days Later was, in that the victims aren’t the re-animated dead. They are, instead, infected – here, with a fungus which causes them to behave in the traditional manner i.e. attacking the uninfected and transmitting the plague with their bites. Also like 28DL, these are resolutely fast zombies: there’s no shambling here, and if you want to get away, you’d better have packed your Adidas. Fortunately, however, there are some areas where this diverges in its scenario, and is all the better for it. 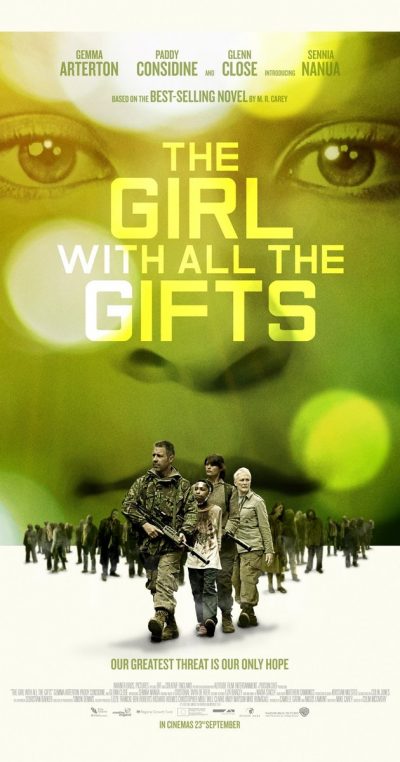 We join proceedings a good decade in, and phase two is under way. For it has been discovered that when pregnant women are infected, their offspring are… different. While still enraged into an uncontrollable feeding frenzy by the smell of humanity, they are otherwise normal. One such kid is Melanie (Nanua): smart, polite, and locked up on a military base with others of her kind. There Dr. Caldwell (Close) is trying desperately to find a cure, even if this means vivisecting the inmates, despite the qualms of teacher Helen Justineau (Arterton), who has bonded with Melanie. When the base falls to a swarm of the infected, the trio, protected by a platoon of soldiers, try to make it across London to another sanctuary on the other side. On the way, they discover the third phase of the plague has begun – and there won’t be a phase four.

This is based on a novel by M.R. Carey, and it might work better if you aren’t too aware of the storyline. Though if you’ve got this far, it’s a bit late. Sorry… For it starts off by keeping the details hidden: we just know that Melanie is a prisoner, subjected to a hellish daily routine, for some unknown reason, and that builds a lot of audience sympathy. [Alternatively, it may make you wonder if we should do the same to all kids. Just sayin’…] Then we get to see what happens when she and her class-mates scent the rest of us. Ah. Perhaps those restraints are necessary, after all. The core of the film is the group’s journey through a post-apocalyptic landscape, which does tend to trade logic for effect. They seem to head directly into the greatest concentrations of the infected, for no obvious reason, e.g. a trip into a shopping mall.

It is undeniably creepy though, since if left undisturbed, the zombies (dammit, I’m calling them that, definitions be damned) go into screen-saver mode, halting and just swaying gently. Also must say, give a budget of just £4 million, the makers do a very impressive job of depicting a devastated and largely deserted landscape. The finale shifts gears again, turning into an urban rendition of Lord of the Flies, Melanie doing everything short of running around with a pig’s head on a stick. The ending is bleak, to put it mildly, yet is both effective and poignant, while making sense, built off what has gone before. It also brings things full-circle, albeit with a twist, becoming a Mobius strip of film. If something of a grab-bag of influences, additionally referencing Day of the Triffids and even the “Red Weed” sequence from Jeff Wayne’s War of the Worlds, it combines the ingredients in a way that’s both tasty and filling.